Earlier, Roger Federer maintained his perfect record in racing through to the last eight 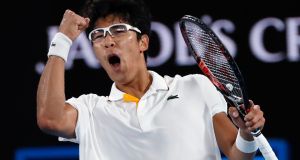 Novak Djokovic suffered a recurrence of his elbow problems and was beaten in the fourth round of the Australian Open by an inspired Chung Hyeon.

Djokovic arrived at Melbourne Park unsure of how his body and his game would hold up having not played since Wimbledon because of the elbow issue.

It was a mixed bag over the first three rounds, with his remodelled service action at times vulnerable, but there had been no clue his elbow had been a problem until he called for the trainer after losing the opening set 7-4 to Chung on a tie-break.

Djokovic had fought back from a horrible start, in which he served four consecutive double faults and lost the first four games, to make it 6-6 but then played a wild tie-break.

The pain and frustration was evident as Djokovic then lost the opening three games of the second set, swiping angrily at the ball and making no effort to chase down several shots.

All of which was to take nothing away from 21-year-old Chung, who is enjoying his best run at a slam and knocked out fellow young star Alexander Zverev in the last round.

The Korean won the inaugural Next Gen Finals in Zverev’s absence in November and, if he can continue this form, could be challenging for the biggest titles very soon, perhaps even this fortnight.

He will certainly be favourite in the next round against American Tennys Sandgren, an even more unlikely quarter-finalist following his upset of Dominic Thiem.

To his credit, Djokovic refocused and fought back to level at 4-4 in the second only for Chung to force a set point and take it after a memorable rally where he repelled everything the six-time champion could throw at him before Djokovic netted.

The Serbian at times looked like the old Djokovic but too often, and especially at big moments, he threw in uncharacteristic errors that betrayed turmoil in his mind. He fought back from 3-1 down in the third set and should have broken for 4-3 only to miss a volley with the whole court open.

Chung, meanwhile, looked completely nerveless on the biggest stage of his career and held firm to force another tie-break.

A quiet character, he was whipping up the crowd after winning another superb point with a forehand pass to lead 5-3 and when Djokovic drove a backhand wide on the Chung’s first match point, the upset was complete.

Earlier, Roger Federer maintained his record of not having dropped a set with a straightforward victory over Marton Fucsovics to reach the quarter-finals.

The 25-year-old Hungarian was a surprise face in the fourth round and acquitted himself well on Rod Laver Arena but ultimately proved no match for the defending champion, who won 6-4 7-6 (7/3) 6-2.

The victory sends Federer through to the last eight in Melbourne for the 14th time and 52nd overall in grand slams, where he is likely to be more severely tested by Tomas Berdych.

This was a first meeting for the pair, although Federer played Fucsovics’ coach Attila Savolt in the second round in Melbourne 16 years ago.

Federer was also playing during the day for the first time all tournament after three matches at night but had no problem making the adjustment and is the oldest man to reach the quarter-finals here since Ken Rosewall in December 1977.

The 36-year-old said: “I thought he played very well. Fast conditions, you have to have quick ideas and execute well and I think he did that very well. I had a hard time breaking through until two sets to love and a break. Credit to him for playing a great tournament, that’s what I told him at the net.”

Berdych has been flying under the radar this fortnight but, after beating Juan Martin del Potro in straight sets, he followed up with an impressive 6-1 6-4 6-4 victory over Fabio Fognini.