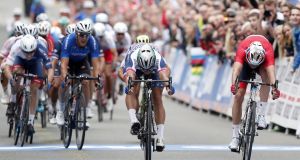 Peter Sagan stayed quiet all day before timing his effort to perfection in the final sprint to become the first rider to claim three road race world championship titles in a row on Sunday.

The Slovakian surged ahead with less than 50m left when he pipped local favourite Alexander Kristoff to the line in Norway.

Australian Michael Matthews took third place after being boxed in during the lead-up to the sprint.

“It was not easy. It came down to a sprint, that was unbelievable,” said Sagan, who joined Italian Alfredo Binda, Belgians Rik van Steenbergen and Eddy Merckx, and Spain’s Oscar Freire in an elite club of triple world champions.

“I’m sorry [for the Norwegian fans] but I’m happy to be world champion again.”

Dan Martin finished 26th in the bunch sprint. Martin was the highest Irish finisher on a day where two Irish riders, Conor Dunne and Seán McKenna, featured in the break for most of the race. Nicolas Roche, who got caught out with a pile up in the closing kilometres of the race, finished in 33rd place.

It seemed that France’s Julian Alaphilippe and Italian Gianni Moscon would fight it out for gold when both jumped away from the leading group 11km from the line on the ascent to Salmon Hill, a 1.4km effort at an average gradient of 6.4 percent.

But they were eventually reined in and most of the top sprinters contested the win in front of huge, flag-waving crowds in the port city of Bergen.

Sagan, who was kicked out of the Tour de France this year for sending Mark Cavendish crashing in a sprint, was clearly the strongest as he added to his titles in Doha, Qatar, and Richmond, Virginia.

Belgium had no pure sprinters and they tried to blow up the race to avoid a mass finish.

They built up a maximum gap of 45 seconds as France tried to take control at the front of the peloton.

The break was ended 25km from the finish after the peloton was split in the penultimate passage up to Salmon Hill.

In the final ascent, Alaphilippe burst away from the leading pack and only Moscon could follow as they opened up a 10-second gap.

France were looking for a first senior road race world champion since Laurent Brochard prevailed in 1997.

They came up just short, though. The Frenchman contested the sprint but ended up 10th.

“We did everything perfectly, except that we did not win,” said France coach Cyrille Guimard, who led Lucien van Impe, Bernard Hinault, Greg LeMond and Laurent Fignon to Tour de France titles in the 1970s and 1980s.