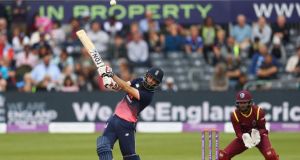 Moeen Ali of England hits out off the bowling of Ashley Nurse as wicketkeeper Shai Hope of West Indies looks on during the third Royal London One Day International match between England and West Indies at The Brightside Ground in Bristol. Photograph: Michael Steele/Getty Images

The anticipation was that the boundaries at Bristol would be too short for one of the most popular left-handed batsmen on the globe. And so it proved. But it was not just Chris Gayle who was delivering a hail of sixes into the stands at square leg. Moeen Ali, the man who protested earlier this summer that he “can’t hit sixes like the others”, sped to the second fastest century hit by an Englishman in a one-day international match.

Moeen’s response to peppering the ball into the stands so regularly was a little more self-effacing than we have come to expect from Gayle, who struck 94 – including six sixes – before he was brilliantly run out by Adil Rashid.

To post his third ODI century Moeen required just 53 deliveries, eight of which were struck over the ropes with no discernible effort. When he joined forces with Chris Woakes, England were stuttering a little at 217 for six but Moeen ran amok in the last six overs, when England plundered 93 runs. Moeen’s second 50 took just 12 balls and a total of 369 for nine was way beyond West Indies’ compass. Despite a vintage Gayle innings England won by 124 runs.

Thus Moeen broke the monopoly for fast hundreds that had been created by Jos Buttler. Until Sunday afternoon Buttler had struck the three fastest centuries for England in this format, the quickest of which was a 46-ball blitz in Dubai against Pakistan in 2015.

By the end of Moeen’s innings any West Indian resolve in the field had disintegrated. The bowlers were mesmerised into bowling deliveries in the slot that enabled Moeen to free his graceful arms; dropped catches and misfields were commonplace, very often when the ball was in the vicinity of the old guard of Gayle and Marlon Samuels. The least brutal of cricketers had shredded any ambitions the tourists had of squaring the series, and with devastating power.

Even at the start of the innings the West Indies were unable to shackle the England batsmen but they did manage to dismiss six of them inside 35 overs. The pitch was much more benign for batting than it looked, but there was some encouragement for well-directed pace bowling, a goal that proved elusive for West Indies. Jonny Bairstow was soon caught and bowled off a leading edge by Jason Holder but Alex Hales and Joe Root were quickly into their stride.

Root purred from the start with three sumptuous boundaries in an over from Jerome Taylor. His runs flowed from magnificently orthodox strokes. After 10 overs Hales was also threatening but a shrewd review after he had been hit on the pad by a sharp delivery from Miguel Cummins sent him on his way. Cummins would be both dangerous and profligate throughout the England innings.

Eoin Morgan then edged his first ball. It is long established that Morgan flits from feast to famine as a batsman; he is currently enduring famine, with 22 runs in his last nine innings. However Root and Ben Stokes gorged themselves in a vigorous 132-run partnership, high-quality batsmen in very good form.

Then there was a little collapse; Stokes was caught on the cover boundary while Buttler and Root fell to Cummins. It seemed that the target would now be manageable until Moeen teed off. He became only the second English batsman – after Buttler again – to score a century batting at seven. But he did break one record by hitting the most runs from consecutive overs in ODI history when taking 48 from the 45th and 46th over – and he only faced 10 balls of those two overs. At one point he had hit six sixes in eight balls.

There was only one way for the West Indies to respond and they did not need much prompting to swing. Evin Lewis hit two sixes from David Willey’s first over before holing out; Shai Hope flickered but the main threat inevitably came from Gayle. Amid the odd miscue Gayle hit some thunderous sixes of his own, one of which, a pull off Liam Plunkett, cleared the stands at square leg.

Samuels, the other old-timer, was less productive. For the second time in the series he was given out caught behind after a review. Neither the umpire, Simon Fry, nor the bowler, Plunkett – who took a career-best five for 52 here – spied or heard a nick as Samuels drove but Ultra Edge delivered the tiniest of squiggles, which was enough to change a decision that Samuels accepted with remarkable phlegm.

But with Gayle at the helm, the chase was still on. There were three consecutive sixes off Moeen straight down the ground, struck with massive certainty. Then Gayle, now in the 90s, made the mistake of contemplating his hundred and he seemed minded to get them in singles. He decelerated and then called for a sharpish one to Adil Rashid at mid-wicket.

The Yorkshireman swooped and his throw broke the stumps with Gayle a centimetre or two adrift. Despite a late flurry from Holder that moment settled a vastly entertaining game in which more sixes – 28 – were hit than in any other ODI played in England.

1 Gordon D'Arcy: Ireland must conquer fear on a scary Halloween in Paris
2 Dave Heffernan delighted to have banished bad memory of his first cap
3 Cork City expected to approve €1 takeover by Preston owner
4 Cian Healy: ‘Realistically I got away with murder when I was younger’
5 Robbie Henshaw likely to be the only Irish change for France finale
Real news has value SUBSCRIBE

LA Dodgers land World Series to end 32-year drought 08:38
MCG could welcome 25,000 fans for Boxing Day Test 08:21
Gordon D’Arcy on a Halloween thriller; Will an empty Hill derail the Dubs? 07:51
Gordon D'Arcy: Ireland must conquer fear on a scary Halloween in Paris 07:55
Seán Moran: Will a silent, empty Hill help to loosen Dublin’s grip on Sam? 07:55
Here is your handy guide to sport on television this week