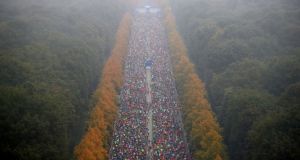 A panoramic view of the Berlin Marathon on Sunday Photograph: Michael Dadder/Reuters

Olympic champion Eliud Kipchoge staved off a surprise challenge from Ethiopian debutant Guye Adola to win an enthralling Berlin marathon on Sunday, but missed out on his bid to set a new world record.

Prior to the race, Kipchoge, fellow Kenyan Wilson Kipsang and Ethiopia’s Kenenisa Bekele had all set their sights on breaking Dennis Kimetto’s leading marathon mark of two hours, two minutes and 57 seconds along the flat, inner-city course.

Instead, Kipchoge ended up becoming embroiled in a classic tussle with the 26-year-old Adola, making his marathon debut, and needed until the 41st kilometre of the damp course to shake off his last surviving rival and cross the line in 2:03:32.

Adola finished 14 seconds adrift of the winner, with his Ethiopian compatriot Mosinet Geremew finishing third in 2:06:09.

Kipchoge’s victory was his second in Berlin and Gladys Cherono helped recreate the roll of honour from 2015, with the Kenyan winning the women’s race in 2:20:23 to also record a second win in the event.

“I am happy to have run this race. The conditions were not friendly because of the rain,” said Kipchoge. “Luckily there was not a strong wind. I didn’t expect Adolo but I am happy for him. This is sport.”

The star-studded trio made their intentions clear from the start, running at a blistering early pace that was well inside the time Kenya’s Kimetto set in the same race three years ago.

The rainy conditions soon took their toll, however, and the elite men had drifted outside world record pace by the 12km mark.

Reaching halfway in 61:29, Bekele was the first of the big names to fall back, his bid to become the first man to hold the 5,000m, 10,000m and marathon world records dashed in the spray kicked up from Kipsang and Kipchoge as they sped away.

Former world record holder Kipsang was the next to run out of steam and walked off the course shortly after the 30km mark, setting the stage for a stunning duel between Kipchoge and Adola.

Adola was determined to upstage the favourite and attempted an audacious bid to break clear after 37km but Kipchoge kept his cool and caught back up with the Ethiopian four minutes later.

A revived Kipchoge then surged clear of Adola as they approached the iconic Brandenburg Gate, leaving the rookie with the consolation of setting the fastest ever debut time on a record-eligible course.

Cherono was unchallenged en route to her second win in the German capital but was a minute slower than two years ago. Ruti Aga of Ethiopia was second, 19 seconds behind, and Kenya’s Valary Aiyabei was third.