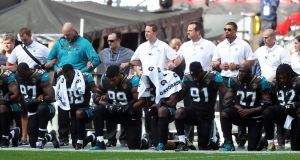 Jacksonville Jaguars players kneel in protest during the US national anthem before the NFL International Series match against the Baltimore Ravens at Wembley Stadium in London. Photograph: Simon Cooper/PA Wire

NFL players staged an unprecedented wave of protest on Sunday, beginning at Wembley Stadium in London, after Donald Trump maintained his attack on players who kneel in protest of the national anthem.

It was a climactic day for a movement that began with a single backup quarterback kneeling before a pre-season game 13 months ago and has since prompted a nation to wrestle with questions of free speech and racial justice. Colin Kaepernick, then with the San Francisco 49ers, kneeled in an attempt to provoke debate over race and police brutality.

He is now without a team but active players have followed his example. On Saturday night, the protest spilled into baseball: the Oakland A’s catcher Bruce Maxwell kneeled during the anthem before a home game against the Texas Rangers. Early on Sunday, shortly before his treasury secretary insisted the president was not picking a fight, Trump doubled down on his bellicose remarks at a rally in Alabama on Friday night . The president repeated his challenge to NFL team owners and encouraged fans to stop attending until the owners take action. “If NFL fans refuse to go to games until players stop disrespecting our Flag & Country, you will see change take place fast. Fire or suspend!” Trump wrote on Twitter. “NFL attendance and ratings are WAY DOWN. Boring games yes, but many stay away because they love our country. League should back US.”

Wembley staged the day’s first game. Around 25 players from the Jacksonville Jaguars and Baltimore Ravens kneeled. No white players appeared to kneel but many players, coaches and even the Jaguars’ owner Shahid Khan linked arms instead as they stood, showing unity for their black team-mates against Trump.

Later, at MetLife Stadium in New Jersey, several Miami Dolphins players wore black T-shirts supporting Kaepernick before facing the New York Jets. During the anthem, the Dolphins locked arms. The Pittsburgh Steelers collectively decided to remain in the tunnel before their game against the Bears at Chicago’s Soldier Field. “We’re not going to play politics,” Steelers coach Mike Tomlin told CBS. “We’re not participating in the anthem today, not to be disrespectful to the anthem but to remove ourselves from the circumstance.

Dozens more players either kneeled or locked arms before the 1pm kickoffs.

Trump made his initial remarks at a Friday night rally for the Republican senator Luther Strange. “Wouldn’t you love to see one of these NFL owners, when somebody disrespects our flag, to say, ‘Get that son of a bitch off the field right now. Out! He’s fired. He’s fired!’” he said. He also complained about rules introduced to improve safety in the NFL, which has a serious problem with head injuries. The president’s remarks and his withdrawal on Saturday of a White House invitation to the NBA-champion Golden State Warriors prompted a remarkably strong response . NBA great LeBron James called the president a “bum” while Buffalo Bills NFL running back LeSean McCoy called him an “asshole”.

NFL commissioner Roger Goodell expressed disappointment with the “divisive” comments while the New England Patriots owner Robert Kraft, a close friend of Trump, was among team owners to side with their players. In a statement, Kraft said he was “deeply disappointed” by Trump’s remarks. “There is no greater unifier in this country than sports, and unfortunately, nothing more divisive than politics,” Kraft said.

In London, Ravens owner Steve Bisciotti said of his players and coaches: “We respect their demonstration and support them 100 per cent.” Los Angeles Rams owner Stan Kroenke, a shareholder in Arsenal, released a statement affirming his belief in his players’ “freedom to peacefully express themselves”. White House officials mounted a defence of the president. Treasury secretary Stephen Mnuchin told CNN: “I don’t think it’s a question of a fight the president wants to have.”

Trump was responding, he said, to “the NFL saying people should be able to decide what they want to do and disrespect the United States flag”. “He thinks this is about respect for the military and so many people who put their lives at risk and what the country stands for - players have the right to free speech off the field. On the field this is about respect for lots of people.”

Speaking on the NFL Network, Hall of Fame quarterback Kurt Warner struck out at critics who have characterised the protests as anti-military. “[THE FLAG IS] a symbol of the ideals of our great country: one nation, under God, indivisible, with liberty and justice for all,” Warner said. “The anthem: it’s a reminder to us of those things. The president of the United States, his role is to uphold and to fight for the rights of every person, every American. And so when I heard the comments, I was so disappointed because I believe [TRUMP’S]comments are completely contradictory to what the flag represents.

“We have this narrative that these protests are contradictory to our flag and contradictory to our military. I don’t see them that way. I see them as complementary to the ideals to the flag, to the military and what they fought for. I have not heard one player that has not been more than grateful to our military. This isn’t about that at all. It’s about standing up for the ideals of the flag.”