EY Hockey League to return after deal struck with umpires 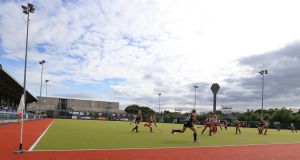 The EY Hockey League will finally return next weekend following two weeks of postponements after Hockey Ireland and the Irish Hockey Umpire Association (IHUA) struck a deal to end the current impasse.

The IHUA did not appoint umpires to the last two weeks of the national competition, making a stance in relation to inadequate expenses and a lack of support for their four-year development plan.

The two bodies hammered out an agreement in midweek to raise the level of expenses from 20 cent per kilometre travel up to 30 to 32 cent with an additional subsistence package for the national competition.

In addition, the two bodies have agreed to meet again on October 1st to discuss conditions for other national competitions as well. There, they will also focus on addressing the alarming drop in umpires across the body with a view to how they can implement the development plan and entice new officials into the sport.

On the field, in the absence of top level games, Leinster women’s Division One took centre stage with Muckross and Old Alex making an early case to suggest they will be title contenders in the spring.

Alex beat Rathgar 5-0 while Muckross – in the first game of their centenary season – came from a goal down to beat North Kildare 3-1, Sophie Barnwell and Niamh Gowing netting in the closing eight minutes.

Genesis beat Glenanne for the first time since their return to the provincial top flight with Sorcha McCooey scoring the only goal. Glenanne missed out on 16 penalty corners to end the tie hugely frustrated.

Our Lady’s beat promoted Clontarf 2-0 with a Karla Kennedy penalty stroke and an Emma Kilbride strike while Avoca and Corinthian drew 1-1, the identical outcome from their last four meetings.