Irish rowers off to brilliant start at World Championships 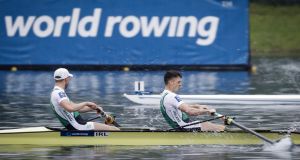 Irish lightweight pair Mark O’Donovan and Shane O’Driscoll are through to the A Final at the World Championships in Florida after winning their heat. Photograph: Inpho

Three wins in a row is a good way to start any event. When Ireland does it at the World Rowing Championships it is a remarkable feat, even if it is in keeping with the rest of the season for this fiercely-ambitious and hard-training team.

Mark O’Donovan and Shane O’Driscoll were first into action on this day of heats on the calm waters of Sarasota-Bradenton in Florida. They have dominated competition in the lightweight pair this season by taking gold in all three World Cups and the European Championships and have become the team to beat.

Britain’s crew of Sam Scrimgeour and Joel Cassells have been their main rivals. They were drawn in the same heat as the Irish and had the added spur of knowing that only the winners would go directly to Friday’s A Final. After an early show by Italy, Ireland took over. Britain challenged, Ireland won – well.

Next up was Paul O’Donovan in the lightweight single. It was not his choice, only adopted when his brother Gary had to pull out of the lightweight double through illness. Paul, who took gold in the single last year, had a credible challenger in his heat in Uncas Batista, the Brazilian who won the world Under-23 Championships in July. Unusually, O’Donovan took the lead early in the race. and burned off Batista in the second half. Because of the huge entry it took both of them only into a quarter-final.

Like her winning brethren, Denise Walsh is a Skibbereen rower. With this brand comes the requirement that a race will be contested right to the finish line. Kirsten McCann is the form competitor in the lightweight single sculls, having won gold at the World Cup in Lucerne. The South African led Walsh by over a length going into the final quarter of their heat, with both on their way to the semi-finals. Walsh was not content. She hunted McCann down and beat her by half a second after an exciting finish.

The new men’s heavyweight pair finished sixth in their heat and Fionnán McQuillan-Tolan and Patrick Boomer face into a repechage on Tuesday, hoping to qualify by the ‘back door’ for the semi-finals.

On Monday, Ireland’s remaining two crews have their heats. The women’s pair of Aileen Crowley and Aifric Keogh row at 3:46 Irish time; single sculler Sanita Puspure at 5:32. The winner of Puspure’s race goes directly into the A/B semi-final, but she has tough opponents in Switzerland’s Jeannine Gmelin and New Zealand’s Hannah Osborne.