High Hopes for Pender in Belgium 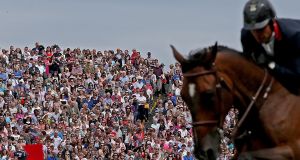 From a starting field of 257, there were 94 clear rounds in this 1.30m speed competition with Irish riders recording seven of these. Pender was clear with his two rides but was easily the fastest on MHS High Hopes, stopping the clock on 57.25 seconds.

These world breeding show jumping championships for young horses continue over the weekend, the consolation finals taking place on Saturday with the finals on Sunday. Including the five-year-olds, whose qualifiers are not against the clock, 13 Irish Sport Horses are through to Sunday’s deciders.

Riding the Blue Buckle Group’s nine-year-old Belgian Warmblood mare Indra van de Oude Heihoef, Sweetnam was one of nine riders through to the second round where the grey lowered one pole in 43.31 seconds. The fastest double clear, which saw him win $71,280, was recorded by the United States’ Kent Farrington on Creedance.

In eventing, a second day of dressage was held in Ballindenisk on Friday with the focus being on the short format CIC classes.

New Zealand veteran Blyth Tait heads the leaderboard at three-star level on Dassett Courage while Britain’s Olivia Wilmot tops the rankings in the two-star class with Zebedee de Foja. In the one-star section, the top spot is held by Britain’s Sam Ecroyd on Christoff.

Show jumping for the CIC classes gets underway at 9am on Saturday with the CCI runners starting their cross-country phase at noon. On Sunday, the action is reversed.

Also continuing over the weekend are Dressage Ireland’s national championships which have returned to the Clarke family’s Cavan Equestrian Centre for this year’s renewal.

Friday’s opening session saw Co Kildare’s Heike Holstein consolidate her position as the most successful rider in the history of the championships as she claimed the evening’s Prix St Georges on the home-bred Sambuca having won the advanced championship earlier in the day with Chameur. Anne Marie Dunphy retained her title as Intermediare II champion with Urbanus.