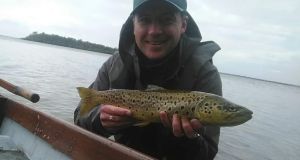 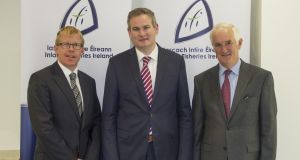 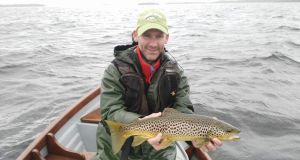 Inland Fisheries Ireland welcomed Minister of State for Natural Resources, Seán Kyne to its offices at Citywest last week where he attended a high-level meeting with chief executive, Dr Ciarán Byrne and chairperson, Fintan Gorman. The minister also took time to talk with members of staff to hear their individual areas of responsibility within the organisation.

“I availed of the opportunity to discuss some of the pressing issues in the inland fisheries sector with senior managers and, particularly, assistance available to stakeholders via the current round of funding,” the minister said.

A dispute has arisen between trout angling representatives and the Economic and Social Research Institute (ESRI). The National Anglers Representative Association (Nara) and the Trout Anglers Federation of Ireland (Tafi) are asking anglers not to participate in surveys that are being conducted by the institute.

In 2016 trout angling representatives, and individuals with an interest in angling, expressed concern about the construct of questionnaires that were being used to gather data for a study into angler preferences.

At that time trout angling representatives received assurances from the ESRI; the ESRI did not honour these assurances. Nara and Tafi believe that all research should be conducted in an ethical manner; prospective participants must be fully informed before deciding to participate.

Ireland’s fly-fishing extravaganza will again feature the largest collection of fly-tyers and game angling stands under one roof in the Galway Bay Hotel, Salthill, Co Galway on Saturday 11th and Sunday, 12th November.

Visitors will have the opportunity to see some of the finest fly dressers and angling celebrities practice their art, while champion fly casters will demonstrate and advise on casting techniques and fishing tactics.

The tackle trade will be well represented with a huge range of trade stands and Mark Bowler, editor of Fly Fishing & Fly Tying will be on hand to launch his new book Manual of Fly Fishing, published by Haynes.

Experts from Inland Fisheries Ireland, Tom ‘Doc’ Sullivan and Dr Ken Whelan will host talks on angling related topics and the youth fly tying competition will give juniors a chance to show their skills.

Salmon caught on the Drowes

Water levels remained very high on the Drowes over the past week with the gauge near 7. This suited fishing and rods reported a number of salmon caught. Both coloured and fresh fish continued to run the river with the catch consisting of grilse and salmon to 4.5kg. For bookings on the Drowes and Melvin, tel: 071-984 1055 (8am to 12 noon).

A two-week report from the Owenea Fishery shows dry weather for the greater part of the first week and the river ran at low water levels. The fishery was fairly quiet with only 15 visiting rods and there are no recorded catch in the register.

On Corrib, in the Greenfields area, Sean Naughton from Kilbannon, Tuam had three fish on wets with best fish 2.5kg while Bert Dennedy and Richard Kelly from Knock enjoyed a day’s dapping out from Cong in the Inchagoill area landing three good fish.

In the Oughterard area, Basil Shields of Ardnasillagh Lodge reported good fishing for the week. Jim Cope from the USA had 17 fish over three days all on daphnia and Larry Kelly from Dublin had 15, also on daphnia.

Michael Keane from Wicklow had nine on daphnia and brothers Jerome Mullane, Newcastle West and Pat Mullane, Charleville, had six for two days on sedges.

On Sheelin, the McIntyre/Guider Cup will be held on Saturday, September 30th, starting at Kilnahard from 11am to 6pm. This is an open fly fishing competition and provides a good warm up before the biggest competition of the season on October 1st. For further information, contact Thomas Lynch on 087-913 2033.