RORC to assess D2D race for addition to points system 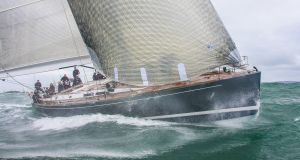 The June 14th race – first hosted by the NYC and County Kerry’s Dingle Sailing Club in 1993 – is working closely with Dublin Bay Sailing Club (DBSC) and the Irish Sea Offshore Racing Association (ISORA) to develop the “mini-offshore” into an international race.

RORC will assess this Volvo-sponsored edition of the race with a view to adding the race to its points series in 2019 but there are already positive signs coming from London Headquarters.

RORC is the principal organiser of offshore yacht races in the UK, including the Fastnet Race and the Commodores’ Cup but its role in Irish racing so far only extends to an association with the Round Ireland Race.

Pre-race scrutineering will be attended by RORC official Janet Grosvenor who could give a green light for 2019.

If included, the Dingle race would join Wicklow’s Round Ireland, which runs in the alternate year, as the only Irish races on the world’s leading offshore points series.

As a 300-miler, the “D2D” race will qualify for a premium points weighting of 1.2, just .3 lower than RORC’s flagship Fastnet Race, Commodore Michael Boyd told The Irish Times.

Most competitors complete the course with only one or two nights at sea but in a breezy 2009 edition a race record was set in a 24-hour time frame by Royal St George’s Michael Cotter in his 80-footer Whisper Maxi, with an average boat speed of 22 knots.

The prospect of RORC recognition has rekindled notions of RORC’s famous past Irish Sea Races from 40 years ago when a race area was covered Scotland to Kinsale.

Anthony O’Leary, a former RORC vice-commodore and twice winner of its Commodore’s Cup, says from a Cork perspective the move could lead to much greater involvement in RORC from the Irish South Coast.

That’s a view endorsed by ISORA’s Peter Ryan of Dublin Bay who says there is a great opportunity for the club to “bring Irish Sea Sailing centres within the RORC fold”.

“We already have ISORA boats in Dún Laoghaire, Howth, Skerries, Isle of Man, Holyhead, Abersoch and Pwllheli but with RORC backing we could see participation further north from Belfast Lough and the Clyde too,” he says.

Boyd says RORC is keen to encourage regional participation and not just English Channel races. With this in mind, the London Club says it will be accepting the Dingle race as a Fastnet Qualifier from this year even though it is not yet part of the series. It’s entirely appropriate as the D2D race sails the same Atlantic waters as the Fastnet.

Although attempts are being made to recruit a Mini transat fleet for June, one problem identified by Ireland’s sole Mini participant, Tom Dolan, is that the D2D date is in the middle of two of the biggest races of the Mini calendar, The Trophée MAP and the Mini Fastnet.