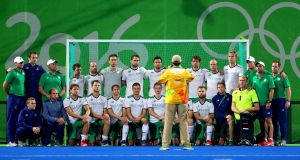 One of the reasons identified for the Irish men’s side qualifying for Rio was an enhanced scientific approach to preparation for the qualifying tournaments.

In the 10 pages devoted to hockey in this weeks 212-page Rio Review launched on Wednesday, the excellent injury profile of the men’s squad was one such indicator that science was working.

The review also highlighted how the sport must operate under severe financial constraints and when the women’s team just missed out on Rio the strategic decision was made to maximise support for the men.

In that light and looking towards Tokyo in 2020 Irish Hockey has some tough decisions to make. It was accepted in the document that if both teams had qualified, it would have been almost impossible to have prepared two high-performance squads in the correct way.

But even then the men felt there was too little contact time for preparation and they were missing specialist coaches such as a sports psychologist and nutritionist.

A lack of man power in general was a negative influence with a significant amount of specialist support coming from the Sports Institute of Northern Ireland.

Given that Ireland are now ranked ninth in the world, which is the highest ranking in the team’s history, indicates the abundant talent available to the sport in the country.

But while the review can be taken as a series of things are wrong with hockey, becoming the first team to qualify from Ireland of any sport since 1948, was in itself an incredible achievement.

But the stress on players should not continue to that degree and 2020 now throws up the same problems. Feedback from the players felt that “the shortage of sponsors should have been addressed by Hockey Ireland” with many feeling happy to take part but not “as the primary drivers”.

Player feedback also showed that the performance of the Olympic Council of Ireland (OCI) in Rio “was regarded as poor” with the Irish team feeling that “it was a burden on the OCI”. That one sentiment alone is pretty damning.

The OCI are now addressing many issues. Irish hockey must do the same thing and get on an entirely different footing if qualification for Tokyo is to become a reality.