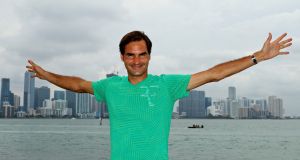 Roger Federer’s decision to abandon the Tour for two months while playing tennis that stands favourable comparison with his golden years is a stark challenge to the game’s administrators to end the grind of a schedule that is pushing players to breaking point. As he said after winning his third title of the year, his second Miami Open and the 91st title of his career: “The body needs a break, the mind needs a break.”

It was his 20th match of the season after returning from an enforced six-month rest to heal knee surgery last year that threatened to bring his career to a shuddering halt and although, from a distance, he looked as fresh as a sprite beating Rafael Nadal 6-3, 6-4 in Sunday’s high-grade final at Crandon Park, it was only his practised calm that disguised the apparent stress he was suffering.

He knows how far he pushed his body and he knows he got away with it. So does everyone else in the game.

Nadal made the most remarkable comeback of modern times in 2013 when, aged 26, he returned from seven months away to win 10 titles, including two slams. Late that year, Andy Murray chose to undergo surgery to save his career. Although he had won two majors with painkillers flooding his chronically painful lower back, he returned a happier and healthier athlete and, after a long and tough struggle, he displaced Novak Djokovic as world number one late last season.

However, that effort also took its toll on both of them. Murray and Djokovic are resting elbow injuries that have put a hole in their 2017 campaigns at the top of the rankings and threaten to disrupt their charge at both the French Open and Wimbledon. They are scheduled to clash again in Monte Carlo, then Madrid and Rome before Paris, with fingers crossed.

The immediate media impulse was to wonder why Federer would take the air from his magnificent balloon ride across a tennis landscape that he has held in thrall since returning from his last “holiday” to win the 2017 Australian Open. Surely, goes the reasonable argument, Federer is giving his bewildered rivals a chance to rebuild their confidence and gather ranking points in his absence. It is like the school captain leaving out the keys to the headmaster’s drinks cabinet and telling the boys to get on with it.

He probably does not share the dream of his millions of fans to be world number one again. The gap is too big and he will not play enough matches, although he leads the calendar-year race to the ATP World Tour Finals in London. But Federer can see beyond the loving headlines, even in mid-miracle.

Imprisoned in the draw from hell in Melbourne with Novak Djokovic, he did not expect to get out of the quarters. But Djokovic fell to Denis Istomin; on the other side of the draw, Murray fell to Mischa Zverev. Fans got feverish again. In the fifth set of an enthralling final, Nadal led Federer 3-1 but after three hours and 38 minutes, he cracked. As he did on Sunday, after a tremendous battle.

Of the many impressive numbers quoted in celebration of Federer’s blitz of Nadal and nearly everyone else, the one that mattered most was the one we have come to take for granted: 35. His age.

It is astonishing to witness the Swiss move with the joy and smoothness of his youth. He went five years without a slam until Melbourne. So superb is his current level, nobody is saying he will have to wait much longer for his next and 19th major, possibly at Wimbledon.

Federer’s break from the Tour taught him something all the grinding winter training blocks and hours in the gym could not. It taught him that, at an age when many players are making retirement plans or sliding quietly into the background outside the top 10, he has, by design or accident, hit on a formula of self-preservation that has made him an even better player than he was at his peak.

If he is not as elastic moving laterally, it is by an infinitesimal increment – and nobody has properly exploited the barely perceptible weakness. His court awareness is sharper, if that is possible, than when he was gambling on nearly every point in shootouts with Nadal. His serve is as killingly accurate. He can still turn his wrist so late that even Murray, whose anticipation is without peer, often cannot calculate which part of the court he must protect.

Nadal might start favourite at Roland Garros and move back to within four majors of his tormentor. On the demanding clay of Europe, Murray and Djokovic will be able to continue their personal duel for the world number one ranking without interference from at least one part of Switzerland (although Stan Wawrinka might yet have a say in that argument in Paris). But Federer, who has moved up to number four in the world, and resting in his Swiss castle until he descends on Paris in May, is the uncrowned king.