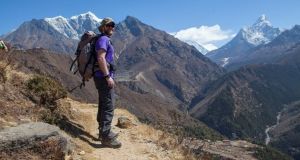 Rory McHugh gets a sight of Mount Everest

We’re sitting on the veranda of the Ama Dablam Lodge in Kyanjuma in the Khumbu valley, at 3,591 metres. The evening is closing in and the clouds have just obscured an amazing view of the towering peaks. This is picture-postcard Himalayas.

The past weekend in Kathmandu now seems a long time ago, with its evenings spent nursing Everest beers while holed up in Sam’s bar in Thamel and its afternoons in a last mad dash to buy kit. The image of the ritual goat sacrifice that we witnessed at Pashupatinath temple and the sight of bodies being prepared for public cremation on the banks of the Bagmati is seared in my memory.

We’re still turning over the happy thoughts of our visit to Child Rescue Nepal’s home in Kathmandu. We spent a great day with the staff and kids of the refuge and all left truly inspired by the work that they are doing to combat child slavery.

From Kathmandu we flew into Lukla on Tuesday morning aboard a twin turboprop Dornier Do 228 18-seater for a 40-minute flight deep into the foothills of the Himalaya.

Lukla airport is a sight to behold, and the sharp descent to land was an exhilarating experience. The runway is just 500 metres long, carved into a mountain ridge with a sharp cliff on one side and a 25-metre vertical rock wall on the other.

A series of infamous crashes, including one in October 2008 which killed 18 people, earned it the reputation as the most dangerous airport in the world. Flights to the airport, which has no radar system and is a hostage to unpredictable mountain weather, are frequently cancelled and pilots need to be highly skilled.

From Lukla we started our trek, reaching the hamlet of Monjo for the first night, and then followed the trail alongside the Dudh Kosi (Milk River), which originates 30 miles away in the Khumbu glacier. We crisscrossed the river over wobbling suspension bridges and then caught our first view of Everest just before reaching Namche Bazaar, the main trading centre in the Khumbu and situated at an altitude of 3,500m. This is the last real town where we’ll be spending time and we enjoyed the luxury of the Everest Bakery for donuts and coffee.

Back here on the veranda, a further hour trek up the valley from Namche, our expedition leader Tim Mosedale is just starting an afternoon briefing.

Choosing which expedition to join had been a complex exercise. You can spend anywhere between $20,000 and $250,000 (18,500-€230,000) just to climb this mountain. Just the permit to climb is $11,000 (€10,200), which goes to the Nepali government. You then need to be happy with your choice of guiding company and in turn their plans for food, oxygen, overall logistics and support – and, critically, the Sherpa team, who will be so important for our climb.

Relatively early on I decided that the risks were too great to go with any of the ultra-low-end providers. As the price of the tour increases, the quality of the expedition and the profits for the expedition company rise too.

Trips above $65,000 are typically luxury affairs run by large expedition companies. A trip above $100,000 typically includes the services of a dedicated, one-on-one western guide all the way to the summit. For $250,000, you might even enlist a celebrity mountaineer like Guy Cotter, Kenton Cool or Dave Hahn to guide you to the top.

One of the key things to watch out for when comparing expeditions and their small print is the oxygen plan. Climbing Everest without oxygen – or Os as they are usually known – is something reserved for elite climbers and is a very risky business indeed. The more oxygen the brain receives, the better an individual’s decision making; the more oxygen and blood flow to the extremities, the lower the chances of frostbite.

Tim jokes that we won’t have a cinema tent but his vast experience in the Himalayas and five successful Everest summits, alongside his tight-knit approach, gives me the confidence I need. At $45,000, this is technically a mid-priced expedition, which I believe gives the same or better safety and probability of success as many of the more luxury options.

Incidentally, you don’t get your money back if things go wrong. There’s no summit guarantee included in the price.

We have 13 in our group, with four including myself looking to summit Everest, two the adjacent peak of Lhotse, and a further seven trekking to base camp, including my girlfriend Jo, my brother Michael, and three close friends, Bernie, Sami, and Luca.

Jonathan Guidry (24), from Florida, is hoping to summit Everest. We climbed together on Denali last year and believe we invented high-altitude Frisbee golf there. Jonathan is a merchant marine, second mate, travelling the world on USNS Dewayne T Williams and has just come off an eight-month rotation in the South Pacific.

Blake Penson, a 35-year-old Australian, is back on Everest for his second attempt at reaching the summit. He reached Camp Two at 6,300m on April 25th, 2015, the day the Nepal earthquake hit, killing 9,000 people in Nepal and triggering avalanches which killed 21 people on Everest.

Having arrived at camp in zero visibility, he had just collapsed into the tent exhausted when it started to shake. The guide shouted to the group to get their boots on and everyone ran outside. They stood huddled together in low visibility with the loud crashes of avalanches and rock falls everywhere. Thankfully Blake’s party escaped unhurt.

Blake still hasn’t forgiven the Australian media which hastily announced his death with his picture on the front page, and interviewed his family and friends back in Australia. He has been determined to return ever since.

Billy, a 50-year-old from Durham, rounds out the group for Everest. He is an ex-para and military forces, served in the artillery attachment to the Royal Marines and specialised in arctic warfare and survival. He’s spent the last 25 years working in oil and gas.

Two of our expedition team are attempting Lhotse at 8,516m, which is the fourth highest mountain in the world and part of the Everest massif.

Ronny Rehn (aka ‘the Rocket’), from Dresden Germany, has recently left his role as an equity analyst at the global asset manager Blackrock. At 37, he’s embarking on an alternative lifestyle and has inspiring plans for later in 2017 and 2018, including working on a cattle ranch in Russia for the summer, a solo kayak expedition deep in Canadian and Alaskan wilderness along the 2,100 mile Yukon, and training to fight Muay Thai in Thailand.

Steve Pain, also from Australia, will be joining us at base camp. He has a background in triathlons and iron man events and is pushing through despite breaking his wrist only four weeks ago.

We’re aiming to be in base camp by April 15th on Easter weekend. We’ll be taking a gradual acclimatisation approach with lots of high passes and taking in a 5,800m peak Pokalde before arriving. This will hopefully have us in top form for tackling the higher terrain and early rotations through the Khumbu Icefall and up to the higher camps, and ideally have us in shape for an early summit if a suitable weather window opens. For now though, we’re focused on enjoying the trek and getting to know each other.

* Rory McHugh is climbing Everest in aid of Rory’s Nepal School Project with Child Rescue Nepal, to build schools in villages off the beaten track which have not yet recovered from the 2015 earthquake. He’d also greatly appreciate your support on virginmoneygiving.com/letsbuildschools and rorymchugh.com

You can also follow his daily progress all the way to the summit through the Garmin mapping site: share.garmin.com/roryeverest