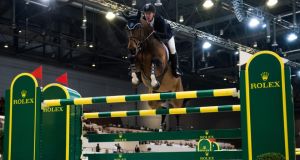 The 41-year-old completed five rounds of jumping on a zero score as his mount, the 11-year-old mare HH Azur, never knocked a pole all week. It was a great championship for mares as Switzerland’s Romain Duguet finished second on four faults with Twentytwo des Biches while, on eight faults, Sweden’s Henrik von Eckermann placed third with Mary Lou.

“I’ve been doing this for 25 years or more, and I’ve come so close so many times and one way or another I’ve messed it up,” said New Yorker Ward, the 10th American rider to win the championships in its 39-year history. “I’m so grateful for my horses and the people around me like my groom, Lee, who has been with me for 29 years, they all helped me pull this off.”

With four faults in round one and five in round two on All Star, Ireland’s Denis Lynch finished equal ninth on Sunday night and in 17th place in the final standings with 24 faults. Switzerland’s Steve Guerdat, who had been bidding for a hat trick of World Cup wins, completed the five rounds on 12 faults to place eighth with Bianca.

After 12 weeks of competition, the Winter Equestrian Festival drew to a close in Wellington, Florida on Sunday, a day which was dominated by Ireland’s Daniel Coyle.

The 22-year-old from Derry won the last international class of the Festival, the final of the Hollow Creek Farm Under 25 series, with Susan Grange’s 12-year-old Kannan gelding Simba de la Roque, and then landed the Suncast 1.50m national Grand Prix with Ariel and Susan Grange’s 10-year-old Contender gelding Dillinger.

In eventing, Co Meath’s Sarah Ennis finished best of the Irish in the CIC3* at Belton, England on Sunday when placing seventh, on 47.40 penalties, with Horseware Stellor Rebound.

In the CIC2* classes at the Lincolnshire event, Carlow’s Sam Watson finished second in Section B with Imperial Sky (47 penalties), behind Britain’s Sam Ecroyd on Arco BB (44.70) and, in Section A, which was won by the hosts’ Rosalind Canter on No Excuse (41.20), Austin O’Connor placed fourth with Colorado Blue (47.70).

Kevin Acres, who is based at Dollanstown Stud outside Kilcock, had an excellent weekend, winning the medium category 3 title on Biala Perla and the advanced medium championship with Saint Emilion 2. Others to claim two titles apiece were Co Kildare’s Heike Holstein, who topped the standings at both Prix St Georges and intermédiare I level on Sambuca, and Co Meath’s Kate Dwyer who won the intermédiare II and Grand Prix championships with Snowdon Faberge.