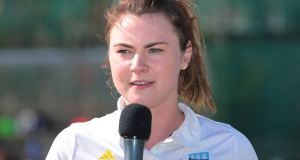 Deirdre Duke: the UCD player has been included in the Ireland squad to face Germany in Dusseldorf. Photograph: Paul Walsh/Inpho

After the heartache of last weekend’s Irish Senior Cup final defeat to UCD, the game’s only goal coming two minutes from time, Cork Harlequins’ Irish under-21 goalkeeper Emma Buckley has received a timely boost with a place in the senior squad named for next week’s games against Germany in Dusseldorf.

Graham Shaw has selected 12 of the squad that won January’s World League 2 in Malaysia but is giving a chance to six other players who didn’t make that trip, among them Deirdre Duke, the scorer of the cup final winner, who missed out due to a dislocated shoulder.

Duke and her UCD team-mates have another title to play for on Saturday in the final round of Hockey League matches. The students visit Rathdown to take on Hermes-Monkstown who moved two points clear at the top of the table last weekend after beating Pegasus 2-0 in Belfast.

A draw, then, will suffice for Hermes to go in to the Champions Trophy as Hockey League winners – but nothing less than a win will do for UCD.

The only other issue to be resolved is at the lower end of the table where Belfast Harlequins and Pembroke Wanderers will attempt to avoid finishing second from bottom, a placing that would leave them battling it out in a play-off to retain their Hockey League status.

Harlequins lead Pembroke by three points, so a draw at home to Loreto would keep them safe even if Pembroke beat the already relegated Ulster Elks at home. Should the teams finish level on points, then Pembroke would move above Harlequins on goal difference.

Meanwhile at Rathdown over the weekend Ballymoney, Queens, Muckross, Old Alexandra and Church of Ireland will battle it out for one place in the knock-out phase of the Hockey League promotion play-offs for which provincial champions Lurgan, Trinity, UCC and Greenfields have already qualified.

1 Gordon D'Arcy: Ireland must go after victory by frightening France into mistakes
2 Henshaw the only change as Andy Farrell names Ireland team for Paris
3 Seán O’Brien: Anger over my parents’ break-up never left me
4 Giovagnoli’s appointment at Dundalk ‘a great story’ says Arsenal boss Arteta
5 Cian Healy: ‘Realistically I got away with murder when I was younger’
Real news has value SUBSCRIBE