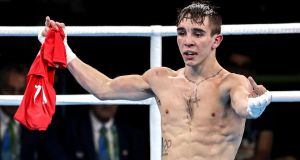 Irish boxing has taken a major hit for failing to reach its Rio Olympic targets, the Association’s high performance funding cut by €200,000 on the 2016 figure, dropping it behind both athletics and sailing.

This was announced in Dublin today as part of the Rio Olympic review and also the Sport Ireland funding for 2017, which will deliver just over €20 million to National Governing Bodies and elite athletes, essentially in line with 2016 figures.

The Rio report made several recommendations specific to each sport, without making any specific references to the Rio ticketing controversy, which is currently being dealt with by the Moran Inquiry.

Just 16 international athletes have been awarded ‘podium’ funding for 2017, worth €40,000 each, including rowers Paul and Gary O’Donovan, and sailor Annalise Murphy, who each won silver medals in Rio.

While the Rio Review highlights the overall high standard of performances at Rio Olympic and Paralympic Games, it also acknowledges Olympic medal target of three was not reached. The OCI ticketing controversy was only briefly mentioned: “The Olympic Council of Ireland (OCI) had a central role in leading Team Ireland at Rio. Notwithstanding significant national and international attention on the OCI in Rio, there was limited comment made in the Review on the OCI operating as a performance barrier. However, the criticisms of the OCI should be addressed with the purpose of developing better relationships moving into the Tokyo cycle.”

Former Olympic walker Olive Loughnane, speaking on behalf of the high performance unit of Sport Ireland, pointed out that no athlete in Rio felt their performance was impacted upon by the ticketing controversy, including the arrest of former OCI president Pat Hickey: “Athletes will always be focused on their own performance,” she said, “and I think they deserve credit for that.”

Also speaking at the review, Minister of State for Tourism and Sport, Patrick O’Donovan TD, said: “This document captures the experiences of all those involved in Ireland’s high performance system and will be a valuable tool for our National Governing Bodies as we look towards the Tokyo Games. I was fortunate enough to attend the Paralympic Games last year and got to see at close hand the hard work that is put in by the athletes and their support teams and their rewards for all that work when our medal winners took their place on the podium.

“The recommendations of the ‘Rio Review’ provide important insights on possible changes to our high performance system if we are to experience such successes, and many more, in the future.”

Chief Executive of Sport Ireland, John Treacy, added: “Sport Ireland is pleased that NGBs have been acting on the recommendations in the review since late 2016, and based on insights gathered throughout the Rio cycle, a high performance investment framework has been developed and we are starting the implementation of this through our High Performance and International Athlete Carding allocations which are also being announced today.”

* Sport Ireland began the process of reviewing the overall Rio Cycle (2013 - 2016) in advance of the commencement of the Olympic Games in August and the Paralympic Games in September. This Review Process was fully completed by December 2016.

* The critical feature of this Review is that the National Governing Bodies took a greater level of control in debriefing their own experiences, which is a positive development. The NGBs have been acting on the recommendations included in the Review since late 2016.

* At the Olympic Games there were two silver medals won. These exceptional achievements were supported by superb performances across a number of disciplines. However, the specific target of three medals was not reached at the Rio Olympic Games.

* Beyond podium results in Rio, Team Ireland saw significant increases in the number of top-10 and top-20 performances over previous Games: Ireland won 11 medals at the Paralympic Games which exceeded the pre-Games target of eight.

* It was a landmark Olympic Games for men’s hockey having qualified for Rio 2016 after narrowly missing out on London 2012. This was the first time since 1948 that a team sport was contested by Ireland. This highlighted the potential of Irish teams with rugby 7s and cricket also part of the Irish system.

* The overall 2016 Games environment in Rio presented a number of difficulties for all competitors and some issues specific to the Irish Olympic team. These challenges were acknowledged by athletes and team staff during the review process.

* There is an unambiguous link between success in high performance sport and levels of investment. There is view widely shared in the high performance community that increased investment is required within the Irish system. However, to the credit of the participating sports, they did not fixate on financial issues. In general, they reflected internally on matters that impacted performance and the reviews are more useful as a result.