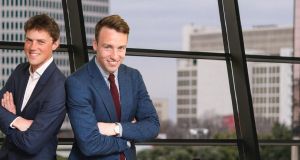 Sam Watson and Diarmuid Byrne who are behind EquiRatings.

The FEI (Fédération Equestre Internationale) has signed a four-year agreement with Co Carlow-based EquiRatings which will see the two organisations working together on risk management initiatives for eventing and endurance.

EquiRatings is an Irish start-up company dedicated to data science and analytics in equestrianism. It was established in 2015 when international event rider Sam Watson joined forces with former lawyer Diarmuid Byrne and the two began to provide data and consultancy to high performance teams and federations around the world.

The company was initially supported by the Carlow Local Enterprise Office and also joined forces with the major US insurance company UNUM who provided EquiRatings with office space in Carlow.

EquiRatings has developed a risk analysis tool for the sport of eventing known as the ERQI (EquiRatings Quality Index) which is an indicator on the likelihood of horse falls on the cross-country phase. With five rider fatalities in the sport worldwide last year, the tool is seen as essential in the management of risk.

Eventing Ireland was the first federation to utilise ERQI and falls fell by 56% at the top two levels of the sport nationally last year. British Eventing has now signed a partnership deal with EquiRatings and the US Federation is in advanced talks with the company.

The new partnership will see EquiRatings work with the FEI’s extensive database which, alongside competition and veterinary data, has been collating statistics on fences, falls and injuries in eventing and other information related to risk management in international competition for the last 10 years, working closely with national federations and other stakeholders.

As an important step in the FEI’s ongoing risk management work in eventing, the company will initially focus on the implementation of the EquiRatings Quality Index at all level of events starting with the elite four-star level.

The agreement will also see the FEI and EquiRatings further collaborating on horse welfare and data analysis projects in endurance, formalising exploratory work between the parties over the last 12 months. Initially this will include developing data analysis and predictive analysis tools to measure and manage risk for both human and equine athletes.

“This exciting new partnership with EquiRatings is part of a holistic approach to risk management, working with our national federations from grassroots right up to elite level,” said FEI secretary general Sabrina Ibáñez. “The ERQI is both a powerful tool for understanding and predicting risk in both eventing and endurance and brings a new layer of insight into the decision-making process at a global governance level.

“We have worked with EquiRatings in the past, but formalising this partnership provides us with a platform to move forward with more concrete analysis of the FEI’s data and gives valuable insight into performance and risk. It also has the potential to contribute greatly to the promotion of our sport and the way in which it is consumed by fans.”

EquiRatings director Byrne commented: “Managing risk in equestrian sports is a collective responsibility and we are delighted to be working alongside the FEI as we all play our part. This official partnership shows the ongoing commitment of the FEI and the FEI Risk Management Steering Group to new measures and tools. We will also be working with a number of national federations around the world in 2017 to implement ERQIs at national level.”