50km race walk could be removed from athletics programme 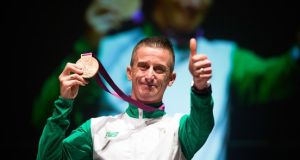 Rob Heffernan was awarded retrospective Olympic 50km racewalk bronze from London 2012. The event could be removed from the athletics programme. Photograph: Cathal Noonan/Inpho

It’s produced two of Ireland’s major championship medals in recent years only now the 50km race walk is in danger of being removed from the athletics programme from next year - potentially denying Rob Heffernan the chance to compete in a record sixth Olympics.

The IAAF will later this month vote on several amendments to their competition structures, including the removal of the 50km walk from all major competitions such as the World Championships and Olympics: a single half marathon distance (21.5km) will instead become the only walking distance, clearly favouring those who compete in the existing shorter 20km race.

At 39-years-old, Heffernan might feel his best years are behind him, yet the Corkman hasn’t yet ruled out competing in the 50km walk through to Tokyo 2020: in Rio, he became the first Irish athlete to compete in five consecutive Olympics, and is already eyeing up another World Championship appearance in London later this summer.

Heffernan, the 2013 World champion over 50km, finished sixth in Rio, and was also awarded retrospective Olympic bronze from London 2012; he originally finished fourth, only to be upgraded early last year after the Russian Sergey Kirdyapkin was finally nailed for doping offences.

The IAAF vote is set for April 14th, and if passed, will see the 50km walk discontinued after the World Cup in May 2018: as things stand, the 50km walk is also the only event left on the athletics programme where the women do not compete, and instead race over 20km only.

Commenting on the matter at the launch of the Rio Olympic review, John Treacy, chief executive of Sport Ireland, said it was up to Athletics Ireland to seek further clarification on any such cut to the global athletics programme.

“That’s where the Irish federation come in, to lobby their international body,” said Treacy. “Now, I only heard that this morning, and I was very surprised as I didn’t get wind of it any time in the last couple of months. It is something that I’m sure Athletics Ireland will be looking at and, if they want our support, we’re happy to support it as well.”

Seb Coe, the IAAF president, has suggested on several occasions the need to shorten the athletics programme: “That’s probably an issue that they considered,” added Treacy, “but they do it (50km walk) in a confined space, and they do laps now. Confining it to loops makes sense, for television coverage, as well.

“I’m not quite sure what the wisdom or thought process behind it is, and I’d like to hear more because I only heard it on the news today. But I think it should be further looked at and, if AAI think there’s a case to be made, they should be making that case.