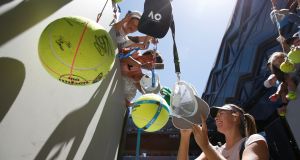 Former world number one Maria Sharapova defeated Tatjana Maria 6-1 6-4 on Tuesday in her first match at the Australian Open since the failed drugs test two years ago that rocked the sport.

The 30-year-old of course still finds herself being questioned all the time about her 15-month absence and the repercussions from it but Sharapova is settling back into the routine of grand slam tennis.

After making her return with a run to the fourth round of the US Open in September, she will be looking to navigate a tricky draw in Melbourne and establish herself as one of the title contenders in a wide-open field.

There was plenty of support for the 2008 champion on Tuesday with regular shouts of “C’mon Masha, we’ve missed you”. And Sharapova admitted she had “shivers” walking on to court.

She said: “I felt like I got a lot of things out of the way physically and emotionally and mentally last year. There were a lot of firsts again for me — playing the first tournament, first grand slam, and just different feelings and what it would be routinely.

“But it felt pretty routine today. I’m just really happy to be back here. It felt really good. Every point was really important to me today.”

Sharapova found herself in the firing line of critics again on the eve of the tournament when she was invited to represent the women at the draw and carried the Daphne Akhurst Memorial Cup onto court.

Sharapova had no interest in responding to claims it was inappropriate, saying only: “I was invited to be part of the draw by (tournament director) Craig Tiley and the tournament organisation, and I kindly accepted.”

As for how far she can go in the tournament, the 2008 champion feels she still has a distance to travel to rediscover grand slam-winning form.

“I feel like I’m building,” said Sharapova. “Some things are coming a little slower than I wanted. Some things I feel good about.

“I think confidence comes with time and with match play and putting yourself in situations where you’re able to take those opportunities.

“I know that nothing will be handed to me or anyone. I’m not overly confident. I have expectations because of my previous results in my career, and I know at what level I can play and what tennis I can produce. But I’m also realistic, and the process of coming back takes time.”

Sharapova could face her US Open conqueror Anastasija Sevastova in the second round, and if she makes it through that, 2016 champion Angelique Kerber looms.

Kerber has made an unbeaten start to the season under new coach Wim Fissette, winning four singles matches at the Hopman Cup and then claiming the Brisbane International title.

She carried that form into her first-round clash with fellow German Anna-Lena Friedsam, winning 6-0 6-4.

“I’m not trying to focus too much on what’s ahead, on the past, or what’s happened in the last year,” she said. “I’m just trying to really restart again and try to enjoy my tennis again.”

Sixth seed Karolina Pliskova began with a 6-3 6-4 victory over Veronica Cepede Royg while there were also victories for top-10 seeds Caroline Garcia and Johanna Konta.