Novak Djokovic denies he agitated for boycott of Australian Open 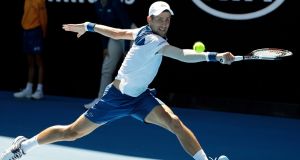 Serbia’s Novak Djokovic in action against the United States’ Donald Young during their first round match at the Australian Open in Melbourne, Australia. Photograph: Dita Alangkara/AP

Revolutions, when ill-conceived, can die as quickly as they are born.

And Novak Djokovic, who has seen his share of political turmoil, was compelled to move with all the nimbleness of thought and foot he showed in an impressive comeback a couple of hours earlier on court here on Tuesday to kill the insurrection that sources insist he is attempting to start.

Denying point-blank that he has agitated for a boycott of the Australian Open next year, a breakaway union or an end to equal pay among men and women players in majors, the Serb was adamant that media versions of his message to a mandated players’ meeting on Friday night misrepresented his views. He also denied there was a lawyer present, drafted in to advise the meeting on the niceties of Australian labour laws.

The assertions were a good deal harder to confirm than the score by which he beat the outclassed the American Donald Young on day two of an intriguing tournament: 6-1, 6-2, 6-4. The injured elbow that has kept him off the tour for six months is, thankfully, back to full working order. He remains a threat on court – and off, perhaps.

“Some of you have written a story that has been a little bit exaggerated,” Djokovic said. “You’ve taken things out of context. I saw that you’ve portrayed me as someone who is very greedy, asks for more money and wants to boycott.”

This, no doubt, was a reference to the fact he lives in tax-free Monte Carlo and was the first player in the history of the game to earn more than $100m in prize money, in 2016 – yet had apparently given little weight to a promise by the Australian Open tournament director, Craig Tiley, that he would double prize money here to $100m within six years.

“I respect your freedom and decisions to do that,” Djokovic said. “But not much of what you have [written]is true. What happened is that we just wanted to talk about certain topics. I don’t think there is anything unhealthy about that.”

Those certain topics represent a serious rearrangement of power in the game. And they have their advocates.

Andy Roddick, the former Slam winner and advocate for more equable distribution of prize money in the game, referenced the players’ involvement in the ATP – who also act for tournament directors – when he tweeted about a new players’ union: “It’s been a good idea for a long time . . Impossible for an entity to represent both sides of a negotiation. I’m amazed it’s not talked about more …”

Andy Murray’s mother, Judy, replied: “Totally agree. What about an umbrella union that represents men and women? That would give the players a much stronger voice to challenge the Slams and the joint ATP/WTA events. Better together.”

Djokovic, by accident more than design, has thus pitched the argument into a miasma that will do little to quell rumours – especially when there were an estimated 150 players in the room on Friday. At least one leading player close to discussions laughed when told of Djokovic’s response, one which left open too many avenues of speculation– as well as the possibility, privately or publicly, of denial by players who were there.

Just “certain topics” then; topics that invited a furious off-the-record response by administrators who clearly felt that Djokovic was taking discussions to a volatile level.

For now, there is calm. It is unlikely the revolution will flare again soon. But there is underlying unrest that neither side can ignore. If Djokovic has achieved anything, however clumsily, he has pulled the curtain back and let a little light in – before quickly drawing it closed again.