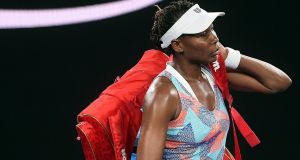 Venus Williams of the USA departs after being defeated by Belinda Bencic of Switzerland in round one of the Australian Open tennis tournament in Melbourne. Photograph: PA

Swiss Belinda Bencic sent an early shockwave through the Australian Open on Monday by toppling last year’s finalist Venus Williams on an opening day of carnage for American tennis.

With defending champion and new mum Serena absent, 20-year-old Bencic’s brilliant 6-3 7-5 win under the Rod Laver Arena roof ensured there would not be a Williams sister in the second round of the tournament for the first time in over 20 years.

It also continued a bleak day for the United States, with three of their four women’s semi-finalists from Flushing Meadows last year falling at the first hurdle.

For former world number seven Bencic, victory was another step on an impressive comeback trail from a wrist surgery that saw her tumble out of the top 300 last year before her return in September.

It was also a matter of felling a seven-times grand slam-winning idol, having never won a set against her in four previous matches.

“I think (before) I had a little bit too much respect, played a little bit careful and safe,” Bencic, who was a toddler when Venus won her first grand slam at Wimbledon in 2000, told reporters.

“This time, I really tried to come out and, you know, hit it big. Also tactically be smart on the court.”

Now ranked 78th, Bencic teamed up with Roger Federer to win the Hopman Cup for Switzerland in the lead-up and was thrilled to have the defending champion’s parents watching from her players’ box as she worked over Williams in less than two hours.

Federer’s parents are used to seeing wins and Bencic did not disappoint, playing the 37-year-old American to perfection.

Soaking up the fifth seed’s firepower, she counter-punched brilliantly to seal the match with a pair of rasping forehand winners.

It had started as a slow-burning contest of short, sharp rallies but burst into life when Williams’s serve crumbled in the seventh game.

The American fought desperately to level but Bencic saved five break points before rain halted play for some 15 minutes to allow the roof to close.

Upon resumption, Bencic laced a huge backhand down the line to finally consolidate, before breaking Williams to love and closing out the set with a crosscourt backhand.

Venus battled to keep touch in an enthralling second set but the clean hitting and younger legs of Bencic carried away the match in the 12th game.

Bencic advances to meet the winner of the first round encounter between Swede Johanna Larsson and Thai qualifier Luksika Kumkhum as she continues her ascent into the upper echelons of the women’s game.

“I don’t think I played a bad match,” she said. “She just played above and beyond. I just have to give her credit for that.”

The only British player in the men’s draw in the absence of injured compatriot Andy Murray, Edmund conjured up the best result of his career the hard way.

The world number 49 twice needed to come from a set down to force a deciding fifth set, where again he battled back from a break down to clinch victory and set up a second round clash with Uzbek Denis Istomin.