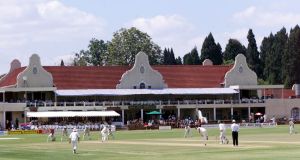 Ireland will play the West Indies at the Harare Sports Club on Saturday, March 10th as part of the 2019 World Cup qualifiers. Photograph: Hamish Blair/Allsport

Ireland have been grouped with West Indies for the upcoming World Cup qualifier in Zimbabwe, where 10 teams team will battle it out for the final two spots in the 2019 World Cup in the United Kingdom.

Ireland will also face the Netherlands, Papua New Guinea and the winner of World Cricket League Division 2, which takes place in Namibia in early February.

The three-week tournament, which gets underway on March 4th, is broken into two groups, with the top three teams going on to a Super Six stage, where they will play the top three sides from the other group. All points won in the group stages will be carried over to the Super Six stage apart from those gained against the bottom two from each group.

Ireland will play two warm-up games in Bulawayo against hosts Zimbabwe and and Scotland before getting their Group A campaign underway with a game against the Netherlands on Sunday March 4th in Harare, where they will play all their group games.

Ireland skipper William Porterfield, who will be bidding to play in his and Ireland’s fourth consecutive World Cup, stated: “It’s going to be a really hard-fought tournament with nearly all the sides in with a genuine chance of qualification. There are certainly no ‘gimmees’ in the competition. It’s a pity there are only two places up for grabs.

“We are working hard in the build up to Zimbabwe. We’re currently in the middle of a tri-series with the UAE and Scotland, and we’ll have training camps in Spain and South Africa, where we have further matches planned before going to Zimbabwe.

“We’ve got a good record against the Windies, beating them in the 2015 World Cup, so we’ll take confidence from that. The Netherlands have got some big players back in recent times, so they’ll be tough, while PNG are improving all the time.

“We will be at full strength for the competition, so hopefully if we play to our potential we’ll make it through to the finals and our fourth straight World Cup.”