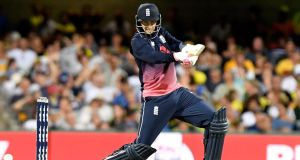 Joe Root of England plays a shot during game two of the One Day International series between Australia and England at The Gabba in Brisbane, Australia. Photo: Bradley Kanaris/Getty Images

England came into this series wanting to win in different ways. So after a dominant performance in the first ODI, a nippier chase on an uncharacteristic Brisbane pitch is one to add to the portfolio. A four-wicket win with 34 balls remaining has given them a 2-0 lead in the series. This is only their second win in eight ODIs at this venue.

Australia opted to bat first and drop their only spinner. So when England used three of their own, bowling the second-highest number of deliveries by spinners in an ODI in this country, the hosts knew something was not quite right. The pitch was more Chandigarh than Gabbatoir.

Even given Australia’s duff selection, Mitchell Starc threatened to save them. Starting his last over in the 38th, with 45 to defend, Joe Root and Jos Buttler set and six-wickets still to go, he found Buttler’s outside edge, then Moeen Ali’s middle stump, leaving England with a far less comfortable 43 to get with four wickets in hand. Chris Woakes ensured a smooth finale with a swift 39 not out, while Joe Root added another measure red-inker (46no) to go with his unbeaten 91 at the MCG.

Jason Roy, in his 50th ODI, fell for only two after his 180 in Melbourne, yet England were still able to rattle Australia’s attack with Jonny Bairstow and Alex Hales combining for 117 off 112 balls to break the back of the chase. While Bairstow and Hales brought up their half-centuries in style – 41-ball and 52-ball efforts reached with a four and six down the ground, respectively – there was minor alarm when both fell in the space of 13 balls, turning 119 for one into 129 for two. That partnership, in essence, allowed a stop-start middle.

It looked like your typical Gabba ODI pitch: a sweat-stained white shirt shade of mock concrete which, they say, offers something for bowlers early on. That “something” amounted to two deliveries in Woakes’ first over. Warner and Aaron Finch then thrashing a hlaf-century opening stand in under nine overs. However, Moeen’s introduction at the end of the Power Play, conceding just two singles off the 10th, got Eoin Morgan thinking. When Ali had Warner (35) caught at slip that brought a change of tack.

Morgan packed away the quicks. It might have gone against convention, like rummaging around for a pair of flip flops for an English January morning, but there was enough to suggest the open-toed approach in usually hostile spin conditions was the way forward. A penny for Australia’s thoughts, who dropped Adam Zampa, the leg-spinner, for batsman Cameron White.

Root (two for 31) ended up being the pick of the bowlers, taking two for 31 from seven overs. He removed Steve Smith lbw, then, Travis Head caught and bowled. Rarely has part-time off-spin from an English hand been treated with such fear. It ensured a boundary-less 55-ball period between the 15th and 24th over which restricted Australia to 33 runs.

Even with a second Finch ODI hundred in as many games which, again, involved time in the middle with Mitchell Marsh, Australia were unable to learn lessons from the MCG.

Again, both fell in quick succession – this time both in the space of five balls rather than 12. Marsh gave Adil Rashid the first of his two wickets when he was stumped off a big leg-spinner, before Finch went for 106 (one less than he managed in the first ODI) becoming Liam Plunkett’s 100th ODI wicket.

Everything Morgan and England tried came good. Even the inordinate stock placed in the team’s pre-match football paid dividends, as Woakes slotted home from close range to catch keeper Alex Carey off his line for an enterprising 27 on debut. That was the only threat of pushing Australia above par. Reaching for that big finish, the hosts lost six for 62 in the last 11 overs. – Guardian service