Reilly bails out of ICRA as sailing body considers its future 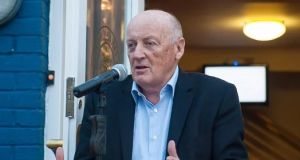 Norbert Reilly: emailed his resignation from the Irish Cruiser Racing Association on Thursday after disagreeing with several developments over the last year

On the eve of a symposium to determine the future direction of the organisation, Irish Cruiser Racing Association (ICRA) executive member Norbert Reilly of Howth Yacht Club has resigned from the organisation.

A former ICRA commodore and a key member responsible for negotiating a major funding plan from Irish Sailing, Reilly emailed his resignation on Thursday after disagreeing with several developments over the last year.

“ICRA has been getting in the way of its own plan for the past two years and [NOW IS]probably a good time to wind up ICRA,” said Reilly in his resignation email.

A memorandum of understanding agreed between ICRA and the Irish Sailing Association (Irish Sailing) in 2016 transformed the finances of the body that represents up to 480 boat-owners around Ireland – plus around 7,000 regular sailors – that typically compete under handicapping systems such as IRC and ECHO at local and national level.

Issues facing the cruiser-racing branch of the sport include a decline in crew numbers, clashing fixtures and disagreement over the venue selection for this year’s national championships.

Several initiatives have been planned, including the CrewPoint scheme for recruiting participants, and a proposed training scheme. Reilly has questioned the implementation of these programmes, amongst other issues.

Responding to the resignation, ICRA commodore Simon McGibney of Foynes YC expressed regret at the development.

“Norbert has been on the executive of ICRA for about five years, including two as commodore, but even before that has been a long-standing supporter, particularly for our successful involvement with several Commodores’ Cup campaigns,” he said.

“ICRA has existed for almost 15 years and it is fitting that we should examine how we’re going to move forward, including how we address problems affecting the sport including some of those that he has raised.”

Irish Sailing chief executive Harry Hermon responded to the news by paying tribute to Reilly’s long-standing involvement with cruiser racing, but also pointed to the need for this weekend’s symposium.

The ICRA symposium will be held at the Castletroy Park Hotel, Limerick, on Saturday, with many cruiser-racing representatives expected from around Ireland. The event is being led by Steve Griffiths of the Gcass consultancy and aims to “develop a strategic model developed to enable the production of an ICRA strategic plan”.

Meanwhile, in the fourth leg of the Volvo Ocean Race from Melbourne to Hong Kong, the leading boats are expected to cross the finishing-line late on Friday evening depending on breeze off the coast of China.

In the close stages, four of the seven boats have elected to engage stealth mode at various times, a tactic that masks their positions from the rest of the fleet. Overall race leader Mapfre has had a mid-rank position so far in the leg, but is relying on leg leader Scallywag to win into their home port and deny double-points for the 6,000 nautical-mile leg to Team Vestas or Dongfeng, their nearest challengers.

Dee Caffari’s Turn the Tide on Plastic crew, including Ireland’s Annalise Murphy, had been the leader the fleet 10 days ago but were becalmed in the doldrums and are fighting to keep off last place from Dutch entry Brunel.

1 Owen Doyle: Day of the jackal may be coming to an end
2 Ireland wary of Peyper calling the tune as they head for Twickenham
3 Andy Farrell ticking all the boxes in advance of England showdown
4 Players impressed with Bono’s Irish pride and desire
5 David Brady says he has witnessed the illegal payments of GAA managers
Real news has value SUBSCRIBE