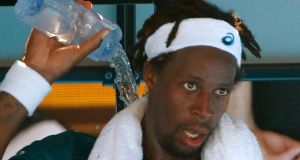 Gael Monfils of France pours water over himself during a break in his match against Novak Djokovic of Serbia at the Australian Open. Photo: Thomas Peter/Reuters

Australian Open officials will review the extreme heat policy at the end of the tournament but insisted they take player welfare very seriously.

A two-day heatwave has seen matches at Melbourne Park played in soaring temperatures, which peaked on Friday at 40.2C.

But they were not deemed extreme enough for the tournament to implement its policy, which can see matches on open courts postponed and those on the show courts played with the roof closed.

Novak Djokovic and Gael Monfils both complained about the conditions they played in on Thursday. Monfils said he suffered a small heatstroke and felt he was dying on the court, while Djokovic believed the conditions were right at the limit of what was playable.

Djokovic also accused the tennis industry as a whole of not caring enough about the health of players.

Those playing on Friday seemed to cope better despite marginally hotter temperatures, although Frenchwoman Alize Cornet needed treatment after lying down on the court in her defeat by Elise Mertens.

Tournament director Craig Tiley said: “Protecting our players and the fairness of the competition is paramount in these conditions, which we acknowledge can be challenging.

“The players compete in hot conditions around the world. The Australian Open is one of the very few tournaments worldwide that has policies to deal with extreme heat and (we) have implemented these in the past when conditions exceeded the threshold.

“We work closely with our medical team to ensure players are educated on best practice in terms of preparing for the conditions, and as we know many of them come to Australia early so they can acclimatise.

“I’ve said before that many of the players train hard for these conditions, and expect to be able to play. Their preparation is admirable and, although many have found the past couple of days challenging, they’ve worked hard to compete at this level.

“The conditions of play are established prior to the event, and this includes the Extreme Heat Policy (EHP). We start the event with this set of rules and policies in place and, in the interest of fairness, can’t change them halfway through.

“Of course we all understand that to compete in these conditions is not easy. It’s also challenging for our team, particularly those working out on court, including the ball kids and officials. We do everything we can to help ease everyone’s discomfort in these conditions.

“At the end of every Australian Open we always review our policies and procedures and consult with all stakeholders. The EHP is no exception and we will again consult with the playing group on it.”

A WBGT reading of 32.5 with the temperature above 40C triggers a suspension in play but the peak on Friday was only 31.1.

The policy was last implemented in 2014, when temperatures topped 40C for three days in succession. By Friday evening conditions had cooled significantly and were expected to be more temperate for the rest of the tournament.