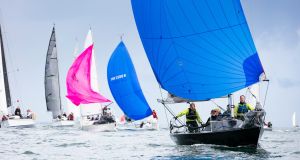 Amid lightning and hail showers, Anthony Gore-Grimes’s Dux from Howth emerged overall winner as the new Division Three champion at the Irish Cruiser Racing Association’s national championships in Dún Laoghaire at the weekend.

A fleet of 93 boats from 24 clubs around Ireland contested the three-day series that enjoyed a testing range of wind conditions on Dublin Bay.

John Maybury’s Joker II retained his Division One national title for the fourth consecutive time amidst strong competition. His J109 was one of 13 such boats that dominated the 18-boat division.

While most of the fleets opted for inshore racing, the biggest entries sailed just three long coastal races for their series that ended in a tie for first place. Paul O’Higgins’s Rockabill VI won overall on tie-break from Jay Colville’s Forty Licks.

Overall, Dublin clubs Royal Irish and Howth took all the major prizes for this year’s event, including the Corinthian Cup for white sails boats won by Windsor Lauden and Steffi Ennis on their Club Shamrock, Demelza.

However, a new Under-25’s trophy was lifted by the all-female crew from Foynes Yacht Club racing their J24 Jasper in Division Three.