Hockey: Ireland women off to a strong start with Malaysia win 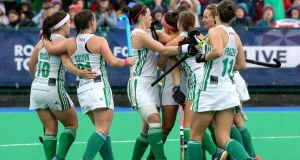 Bethany Barr reckons she has never hit the same heights in jump tests as she did when she set Ireland on course for an opening day win over Malaysia at the FIH Series Finals in Banbridge.

She got a crucial touch to redirect Shirley McCay’s penalty corner slap past Farah Yahya in the third minute. It was a special moment for the Lurgan woman in her first match in a world ranking tournament and she gave an exuberant celebration to match.

Katie Mullan’s reverse-stick bash with 21 minutes to go gave some breathing room before Siti Husain’s simple finish made for a nervous finish for the Green Army.

But they got over the line 2-1 to start the campaign on the front foot. It was a slightly ring rusty performance, an understandable situation in tough, rain-soaked conditions off the back of few practice games of late.

But Ireland always looked the more composed in front of a couple of thousand fans, enjoying the side’s first home tie since the World Cup silver medal.

For Barr - one of two newcomers on the day along with Sarah Hawkshaw -her early opener was the perfect way to shake off heavy pre-match nerves.

“We do a lot of jump tests but I don’t think I have jumped as high as that before. It did settle the nerves; going in, I know I was very nervous,” she said.

“I get nervous before every game but doing that so early gave me the confidence and moments like that just remind you you are playing the sport you love and it was a nice way to start the game.”

Ireland face the Czech Republic on Sunday at 3pm in their pursuit of top spot in the group which would lead to an automatic passage to the semi-finals.