New Zealand make it three from three against Afghanistan 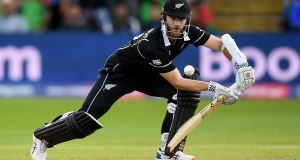 New Zealand made it three wins out of three at the World Cup after James Neesham’s maiden international five-wicket haul laid the foundations for a comfortable win over Afghanistan at Taunton.

Afghanistan had motored along to 66 without loss after being asked to bat first in this day-night encounter but the intervention of Neesham (five for 31) led to a collapse from which they never fully recovered.

A total of 172 all out after 41.1 overs seemed woefully insufficient and, despite a couple of early scares, that proved to be the case as Kane Williamson’s unbeaten 79 clinched a seven-wicket triumph with 17.5 overs to spare.

New Zealand are therefore top of the embryonic standings after routine victories over Sri Lanka and Afghanistan, either side of a nail-biter against Bangladesh, but tougher tests lie ahead, starting with India next Thursday.

For Afghanistan, a third straight defeat was compounded by a head injury to Rashid Khan, who was unable to take to the field for New Zealand’s chase after being struck on the helmet while batting.

The day had offered plenty of promise for Afghanistan as Hazratullah Zazai and Noor Ali Zadran — the uncle of the dropped Mujeeb Ur Rahman and drafted in because of Mohammad Shahzad’s tournament-ending knee injury — flourished.

The adventurous Hazratullah and the more orthodox Noor Ali started confidently, even if the former led a charmed life, as they put on 61 in the opening powerplay but the introduction of Neesham precipitated a collapse.

Perhaps taking advantage of Lockie Ferguson making life difficult at the other end, Neesham was able to take three of four wickets to fall in the space of 21 balls as Afghanistan lurched from 66 without loss to 70 for four.

Hazratullah was caught at deep cover point for 34, Rahmat Shah got a leading edge to backward point and Gulbadin Naib burned a review after throwing his bat at a wide delivery and getting a slight nick behind.

By this stage Noor Ali (31) had been strangled down the leg side off Ferguson while after two brief rain delays, Neesham had his five-for when Mohammad Nabi and Najibullah Zadran were both caught behind in the space of four balls.

Hashmatullah Shahidi had taken 20 balls to get off the mark but where his team-mates had been reckless, he continued to show a commendable degree of restraint.

But he was losing partners at an alarming rate, Rashid departing when he leaned into a delivery from Ferguson that kept a little lower than anticipated and struck him on the helmet before ricocheting into his stumps.

Shahidi did at least bring up a defiant half-century but was last man out for 59 when a leading edge flew to the third man boundary, handing Ferguson his fourth wicket.

New Zealand’s reply started in the worst possible fashion when Martin Guptill was dismissed for a golden duck, caught at point after inside edging on to his pad off Aftab Alam, who then had Colin Munro caught at third man.

But New Zealand’s twin batting pillars — Williamson and Ross Taylor — steadied proceedings in an 89-run partnership, putting away the bad balls and rotating the strike in an efficient, if underwhelming, manner.

Williamson moved to an unremarkable but important half-century in the lengthening shadows but Taylor could not follow suit, missing a low full toss from Aftab on 48.

Aftab should have had his fourth wicket but Tom Latham was given not out when trapped in front and though Hawkeye showed the ball would have clearly hit the stumps, Afghanistan had already wasted their review.

It may not have mattered as Williamson picked up the tempo to get his side over the line, the New Zealand captain fittingly scoring the winning run.