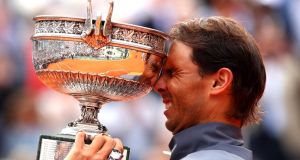 Rafael Nadal blew through the final of the French Open like a hurricane on Sunday, idling briefly to give Dominic Thiem false hope, before winning his 12th championship, one of the most remarkable records in sport and unlikely ever to be matched.

There was little the 25-year-old Austrian could do to stop his majestic opponent from winning 6-3, 5-7, 6-1, 6-1 in exactly three hours on Court Philippe Chatrier, although he tried all the way to the end.

Records tumbled, as they always do when the Spaniard plays at Roland Garros. He is the first player to win a dozen titles on the same court (Margaret Court won her 12 Australian Opens at different venues), putting him four clear of Roger Federer’s eight at Wimbledon and Novak Djokovic’s seven in Melbourne.

For the moment – and the foreseeable future – the majors remain the property of the old guard. The big three of of Nadal, Federer and Djokovic have shared 10 straight slams. The last player outside the exclusive club to interrupt their dominance was Stan Wawrinka, who beat Djokovic to win the 2016 US Open.

The early jousting on a mild Sunday afternoon was even. Thiem, who lost to Nadal in straight sets in last year’s final, got the first break point, outsmarting the king of Paris in a high-grade exchange in the fifth game – and he cashed in with a smash at the net. But just as it looked as if the Spaniard had a fight on his hands, Thiem’s racket started shaking and they were back on level terms.

Still, Nadal had to save break point to hold in a long seventh game, and he was leaving too many balls short. He led 4-3 but there was not much in it.

When Nadal answered a drop shot with a better one of his own, he grabbed two break points, and, after forcing a tired for hand out of Thiem, served out the set. As Thiem’s final backhand flew wildly wide, Nadal looked firmly in control.

Nadal’s concentration seemed to dip at the start of the second, but Thiem, ahead in the serving cycle, could not turn it into a breakthrough, even though he was serving well. It might have been residual fatigue setting in, given had finished his held-over semi-final against Novak Djokovic less than 24 hours earlier and, crucially, had spent two hours longer reaching the final than Nadal, who completed his straight sets semi-final win over Roger Federer on Friday.

Nadal matched him with ball in hand as they slogged their way to 4-4, and Thiem held to love. As the first Mexican wave kicked in after an hour an a half – the crowd sensing perhaps that they were not going to get their money’s worth – Nadal stayed in the set with a cracking forehand to stay in the set.

Thiem aced and made it 12 points in row held on serve. Just as the energy and tension were ebbing from the occasion, Nadal shoved a forehand wide to hand Thiem two set points, followed by an off-balance, overcooked reply from the baseline, and, in a twinkling, after an hour and 43 minutes, we had a contest again.

Rafa’s revenge was swift and clinical. He raced to 3-0, allowing the Austrian just one point in the first nine minutes of the third set. The ball was now flying off Nadal’s angry racket like rain. As Mats Wilander remarked: “I don’t know if you can play tennis any better than this...” In a quarter of an hour he was 4-0 up and coasting.

Thiem held to love to stem the flow, pumping his fists defiantly. But the set was a lost cause. Nadal sent another screaming backhand across Thiem’s static defence and he was 5-1 up after 20 minutes. He broke again to take the serve into the fourth set, perfectly placed to finish the job.

Nadal changed his shirt and bandana, rewrapped the handle of his racket and went back to work, as he has done in 11 finals here, methodically and with menace. Thiem, a break down early, got a couple of looks on Nadal’s serve in the third game, but could not convert the chances.

A set and 1-4 down against Nadal on clay (even though he has four wins over him on the surface), Thiem had nothing left to give but desperate thrashing. It cost him his serve and Nadal served out the match to 30, collapsing to his favourite piece of dirt on the planet. - Guardian