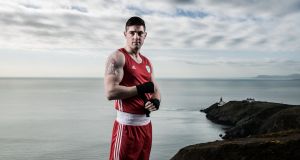 Joe Ward’s defection to professional boxing a year out for the Tokyo Olympics comes after high performance director Bernard Dunne and Sport Ireland “did everything we could” to keep him. The 25-year-old, twice world finalist and three times European amateur champion this week confirmed that he had signed a professional boxing management contract with Times Square Boxing based in New York City.

Despite missing out on qualification for London 2012 and disappointment in Rio 2016, the Westmeath southpaw was expected to be a powerful contender for a medal at the 2020 Olympics next year and represents an enormous loss. “I have to say I am surprised, a wee bit disappointed just 12 months out from an Olympic Games,” said Dunne, who knows what the professional ranks hold for Ward. Dunne became world champion in 2009, defeating Ricardo Cordoba in Dublin to become the WBA super bantamweight champion.

“I’m not sure who is advising him but it is a surprising decision,” added Dunne. “We’ve done all we can. I’ve met with Joe several times, I’ve spoken with him on the phone after the last number of weeks and we’ve tried all we can to keep him. But his decision – and we’ve got to respect it for him and his family – is to turn professional. Unfortunately it’s our loss and professional sports gain.”

Not alone was Ward the captain of the Irish boxing team but he would have brought the biggest collection of world and European medals of any current Irish athlete into the next 12 months of Olympic campaigns. But he has always been drawn to the professional ranks since bursting on to the international scene as a precocious teenager eight years ago and has longed for an opportunity to prove himself. His timing is questionable but his ability is not.

“There’s no doubting Joe is a special talent,” added Dunne. “He’s been a part of this program since he was 17 years of age and we’ve invested a lot of time and resources into him. Joe has performed exceptionally well at most major tournaments, European medals, World medals.

The next step was Olympic medals and over the last two years since I’ve been here we were very focused on challenging Joe to perform to his potential.

“I’d a feeling we were getting that, I’d a feeling that we were moving in the right direction. But when you have a talent like that professional sport will come calling. It has a lot more riches to offer, I suppose, than we do.” Ward has teamed up with former heavyweight Joe Winters and Harvard-educated lawyer Adam Glenn at Times Square Boxing based in New York city and is expected to move from his home in Moate. Although he has travelled the world extensively and been part of extended training camps in other countries, this move represents a complete adjustment.

Ward also has a young family and the logistics of living and performing in two countries could be one of the challenges he faces. Patience is also demanded.

Former Irish team-mate Michael Conlan, a world amateur champion and Olympic medallist, is still climbing the professional ladder with 11 wins in as many outings, having turned professional in 2016 after Rio.

“They are very different sports, amateur and professional,” warned Dunne. “Time will tell. I think natural ability . . . Joe can fight and he’s strong. That will get him so far. Then it’s about his will, his will to prepare to win. Everyone has a will to win.