England back on track with dominant win over Bangladesh 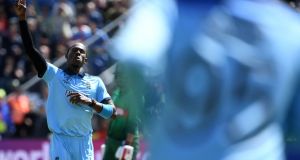 Jason Roy helped himself to a sparkling century as England got back to winning ways at the World Cup with a 106-run victory over Bangladesh.

An unexpected setback against Pakistan had raised the stakes of this Cardiff clash, but if there was any lingering tension, Roy’s commanding knock of 153 in 121 balls blew it away in style.

He was responsible for five of England’s 14 sixes, including three in a row immediately before his exit, setting the scene for a daunting total of 386 for six.

As well as being a new ground record for Sophia Gardens it also represented England’s best ever score in the competition, eclipsing 2011’s previous high by 48.

Bangladesh never threatened to go close in reply, during which both Jofra Archer and Mark Wood touched 95mph, but Shakib-al-Hasan’s classy 121 spared them a rout.

Archer topped and tailed the innings to finish with three for 29, with Wood claiming two and Ben Stokes chipping in with three of his own.

Moeen Ali’s off-spin was certainly not missed, the all-rounder somewhat surprisingly dropped in favour of the returning Liam Plunkett, with England’s pace barrage rolling Bangladesh for 280 in the penultimate over.

The only real concern of the day concerned Jos Buttler, who hurt his right hip during a fine knock of 64 and played no part in the second innings as Jonny Bairstow took over wicketkeeping duties.