With Singapore to come on Tuesday, Ireland look on course for a semi-final place 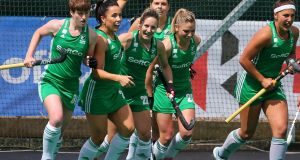 Anna O’Flanagan and her Irish teammates celebrate a goal against the Czech Republic at Banbridge Hockey Club. Photograph: Jonathan Porter/Inpho/Presseye

O’Flanagan scored four times in the 8-1 win over the Czech Republic at Banbridge, adding to Saturday’s slightly lethargic 2-1 success against Malaysia.

With the timid threat of Singapore to come on Tuesday, it means Ireland are all but assured of a direct route through to next Saturday’s semi-finals, skipping the quarter-final phase.

While the Malaysia tie – played in horrible conditions – was a trudge, the Czech win was one for the scrapbook against a side that has traditionally made things difficult, notably at the 2017 Europeans.

Nicci Daly scooped up a fourth minute rebound after Barbora Chechakova contrived to boot the ball into her own helmet from Katie Mullan’s rasping shot.

O’Flanagan’s clever spin move from a Chloe Watkins assist – one of a number of connections between the two former Monkstown players – strengthened the position.

The fesity defensive nature, though, was what meant this result was never in doubt as Roisin Upton and Hannah Matthews stepped through to clean up everything while Lizzie Colvin’s ability to pinch possession unleashed numerous counters.

“I live for those turnovers,” Colvin said afterwards with a beaming grin after she was instructed to “smell those turnovers” by coach Gareth Grundie.

Two-nil was maybe not reflective of Ireland’s dominance at half-time but they soon put that right with O’Flanagan taking her time before slotting the third after two dummies shook off her marker.

Zoe Wilson pushed the lead out to 4-0 at the three-quarter mark before a run of three goals in four minutes stretched it out to seven. O’Flanagan got a couple of those, her fourth the pick of the bunch; it was the second time she has nailed four goals for Ireland, the previous one against Kazakhstan in 2017.

Jindriksa Reichlova got one back but there was still time for Daly to round out the win with a neat touch to Mullan’s cross for 8-1.

For interim coach Grundie, he described the performance as a “big step up” from Saturday, adding: “We had that ball speed, that tempo which made a big difference and we played some really nice attacking hockey.

“Malaysia was the first game since the World Cup and it was always going to be tricky. The girls relaxed a bit and the girls were able to play the hockey we wanted to play coming into the tournament.”

Singapore on Tuesday does not look set to be much of a challenge after they wilted 5-0 to the Czechs and were soundly beaten by Malaysia.

Grundie added the side will “take nothing for advantage” but the expectation will be a heavy scoreline again to match the 10-0 when last the sides met two years ago.

Then comes the waiting game for a semi-final opponent.