Gallagher and Gillespie left pondering what might have been, particularly as they were so well positioned heading towards the sprint 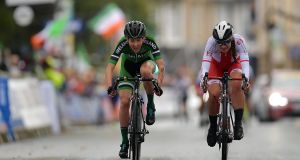 Ireland’s Maeve Gallagher in the junior women’s race from Doncaster to Harrogate at the Road World Championships in England. Photograph: Justin Setterfield/Getty Images

What appeared to be strong Irish hopes in the finale of the junior women’s road race at the World Championships in England evaporated inside the final kilometre on Friday, with two riders crashing out of the group which disputed the medals.

Both Maeve Gallagher and Lara Gillespie came down well inside the final kilometre, losing chances of a medal or, possibly, the race victory.

American rider Megan Jastrab just about held off the chasing group after she and Russia’s Aigul Gareeva remained clear heading into the final kilometre. Jastrab finished just ahead of Julie De Wilde (Belgium) and Lieke Nooijen (Netherlands), with Gareeva swamped and taking fourth.

Gallagher and Gillespie had been ideally positioned, but both came down in a large crash. Gallagher finished 33 seconds back in 25th place, while Gillespie trailed in one minute 18 back in 39th.

Ireland’s third entrant Lucy O’Donnell also had bad luck. She crashed 40km into the race and finished over 13 minutes back.

“It was my first road World Championships, and I was really excited but so nervous, I have to say,” she said. “It was okay at the start…it was a bit dodgy because it would be stopping and going, stopping and going, but then it settled down a bit later on in the race.

“But then all of a sudden there was just braking and they went down in front of me. I couldn’t do anything about it. There was a problem with my bike, so I got the spare bike and managed to finish.”

The other two Irishwomen were left pondering what might have been, particularly as they were so well positioned heading towards the sprint.

Gallagher has also had an impressive year. In April she and Gillespie were second and third overall in the Witham Hall junior women’s Grand Prix stage race. Gillespie won the final stage, with Gallagher netting second. Gallagher beat Gillespie to take the junior national road race title in June.

The World Championships continue this Saturday afternoon with the under-23 road race. Ben Healy will compete for Ireland, three days after he finished a solid 15th in the time trial.