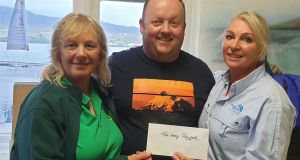 Members of the Irish Ladies Flyfishing Association travelled to Loughanure Lake, Annagry, Co Donegal earlier this month for the third trial to select the 2020 team to represent Ireland at the home international championships next May at Lake of Menteith, Scotland.

The trial was hosted by the Loughanure Anglers’ Club who provided top class hospitality and the fishing itself was equally as good with all the ladies catching lots of those beautiful ‘wee brownies’, some experiencing their first ever wild brown trout.

Catch and release was the order of the day for trout and a few ladies reported hooking into sea trout and several salmon were sighted at the mouth of the Crolly River.

All the lady anglers left with warm memories and are looking forward to returning to the lake.

The charges followed an investigation by Inland Fisheries Ireland (IFI) in relation to a pollution incident, which occurred on the River Allow at Kanturk, Co. Cork during August 2018.

The pollution resulted from a milk spillage during a tanker loading process at the company’s production facility in Kanturk, which then discharged to the river.

Judge Sheridan granted probation after hearing evidence that the company had made a significant investment to upgrade their facilities in recent years and that a conviction would have a detrimental effect on the company’s wellbeing.

The court awarded €2,654 for costs and expenses to IFI and ordered the co-operative to make a payment of €7,500 to the local angling club.

IFI’s senior environmental officer, Andrew Gillespie, said: “The River Allow and its tributaries are a prized recreational angling resource with much of the catchment soon to benefit from the locally-managed and Government-funded ‘Duhallow Farming for Blue Dot Catchments’ project.”

Members of the public can report instances of illegal fishing, water pollution of invasive species by calling Inland Fisheries Ireland’s confidential hotline number on 1890 34 74 24 or 1890 FISH 24.

Considering it was the team’s first gold medal outside of Ireland in 22 years – their last victory attained at Loch Leven in 1997 – it made this year’s win all the more special.

Hot meal included
It’s not too late to enter the Lough Sheelin Stream Rehabilitation competition this coming Saturday (Oct 5th) with fishing from 11am to 6pm. Entry fee of €90 includes hot meal. First prize is a 19ft Sheelin Boat and Paddy Sheridan Memorial Cup.Contact ASAP, Eamonn Ross at 086-661 9834 or 049-952 6602.