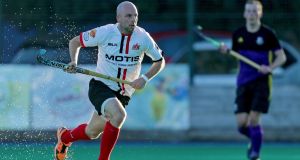 Annadale’s Peter Caruth is among the players who have been included in Mark Tumilty’s Irish squad for the games against France. Photograph: Laszlo Geczo/Inpho

Mark Tumilty has made sweeping changes to the Irish men’s squad for their two-match series with France next week, his first games in charge since taking on the coaching reins for the Olympic qualifying campaign.

Crucially, the squad looks to have a more attacking outlook with Peter Caruth and Jonny McKee getting their first inclusions since July 2018 while Matthew Nelson is brought back into the fold for games against France next Tuesday and Wednesday.

Chris Cargo returns having missed the summer schedule due to work commitments; Luke Madeley is back from a foot injury that ruled him out of August’s Europeans.

The other two incoming players are goalkeepers David Harte and Dave Fitzgerald, the former another who was injured for the Euros, replacing Jamie Carr and Mark Ingram.

The players left out this time, meanwhile, all feature farther back in the field. Defender Paul Gleghorne and midfielders Kirk Shimmins and Stephen Cole are all left out this time while Matthew Bell is unavailable.

Tumilty’s switches look set to potentially allow the likes of Michael Robson and Sean Murray move back into midfield roles having been deployed as utility forwards under former coach Alexander Cox.

The series against France is part of preparations for the Tokyo qualifiers which take place on October 26th and 27th in West Vancouver against Canada.

The matches against France are timed to mimic the back-to-back nature of the qualifiers. They will be played on Tuesday at 6pm (local time) and on Wednesday at 5.30pm.