Athletics to drop ‘fastest loser’ phrase in sign of the times 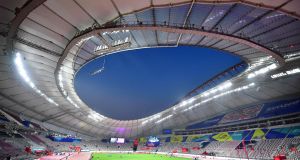 The Khalifa International Stadium in Doha ahead of the IAAF World Athletics Championships. Photograph: Getty Images

The IAAF is discreetly moving away from using the term “fastest loser” on the eve of the world championships after complaints from some inside the sport and on social media that the phrase might devalue athletes’ achievements, the Guardian publication has revealed.

Reporters and commentators have been told the phrase “fastest non-automatic qualifiers”, which has already been adopted in some quarters, is more appropriate to describe athletes who do not win a race but make it through to the next round of competition.

One well-placed source said: “I wouldn’t go so far as to say it’s ‘banned’ but effectively yes.” Another joked: “Soon we’ll have to call them all winners … but some were just a little bit faster than the others.”

The IAAF, however, insists the move is merely a sign of the times. As a spokesperson for athletics’ governing body put it: “There hasn’t been an official policy to drop the phrase ‘fastest loser’ but the move away from it reflects the evolution of the language. We want to recognise making finals or making it through a heat is a good thing, whatever place an athlete finishes.”

With Qatar two hours ahead of Britain, much of the world championships will be shown in primetime on the BBC. That should provide a rare showcase for a British team that the UK Athletics performance director, Neil Black, insists is “incredibly well prepared” and primed to do better than many expect.

However, Black said the 1500m star Laura Muir, one of Britain’s most reliable medal hopes alongside the sprinter Dina Asher-Smith and heptathlete Katarina Johnson-Thompson, was not in ideal shape as she attempts to recover from a calf injury sustained in July.

“Laura doesn’t have to race a lot to be able to race well,” said Black. “It’s about getting there in a week’s time and the biggest challenge is the obvious one of three races in four days. That’s the bit that’s kind of unknown. Laura will be there in good shape. And then we’ll all see what the outcome is.”

When pressed about her condition, Black added: “Everything suggests she’s in good shape, progressing towards great shape. The honest phrase is Laura Muir is still going to be competitive to win a medal.”

A spectacular 10 days of athletics almost certainly lies ahead. In the men’s 200m the American Noah Lyles says he is going for Usain Bolt’s world record, while the long-standing world record for the 400m hurdles could be broken by any one of Karsten Warholm, Abderrahman Samba or Rai Benjamin, the son of the former West Indies fast bowler Winston.

On the women’s side the Belgian Nafi Thiam is aiming to show again she is the best female athlete in the world in the heptathlon while Asher-Smith is looking to become the first Briton to win three medals at the same world championships.

However, many inside the sport are nervous about the potential poor crowds after the Guardian’s story this week about only 50,000 tickets being sold – which will lead to migrant workers and children with free tickets being bused in. For context 700,000 people watched the same event in London in 2017.

Richard Kilty, who is captaining Britain, believes the sport needs an injection of razzle and dazzle to appeal to more fans. “I think we need to do a better job of building the image of our athletes,” he said. “Eddie Hearn has just rejuvenated boxing completely by creating rivalries and then suddenly everyone’s a boxing fan now. I think it’s going to take someone like him to come in and slightly change the world.”