Competition under way in Cork and Cavan this weekend 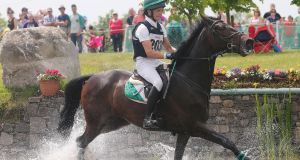 Cathal Daniels, was the overnight leader in the CCI2*-L in Cork. Photograph: Inpho

Competition got underway on Thursday at the final international horse trials being held in Ireland this year at Ballindenisk, Watergrasshill, Co Cork.

The event has attracted an entry of almost 300 for the eight classes which run from CCI4*-L level down to the national Michael Leonard championship for five and six-year-old horses.

After the first session of dressage in five of the eight classes, British riders led in three through Sam Ecroyd on Arco BB (CCI4*-L), Izzy Taylor with PSH Lava Flow (CCI3*-L) and Oliver Townend on Alcatraz (CCI3*-S).

Also taking place this weekend are Dressage Ireland’s national championships which run from early Friday morning to the late afternoon on Sunday at Cavan Equestrian Centre.

Here, all grades of rider are catered for with Kildare’s Heike Holstein set to defend her title as national champion in the Grand Prix early on Saturday evening. Holstein rides the home-bred mare Sambuca on which she won a record 12th national title last September and with which she was on the Irish team which booked a place at next year’s Tokyo Olympics when competing at the European championships in The Netherlands last month.

Irish international show jumpers are in action on both sides of the Atlantic this weekend with five-star competitions being staged at Waregem in Belgium and at Governors Island, New York where the finals of this year’s Global Champions Tour and League are taking place.

Ireland will be represented at the top level at the first venue by Denis Lynch and at the second by Michael G. Duffy, Darragh Kenny, Shane Sweetnam and Shane Breen. The last-named is quickly back in competition having fractured his fibula in a warm-up incident when jumping in St Tropez two weeks ago.