Ireland looking to get back on track in T20 format 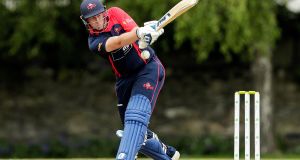 Greg Thompson is a new face in the Ireland squad. Photo: Laszlo Geczo/Inpho

The Test match at Lord’s may be preoccupying Ireland’s supporters and players, but the next six months will be all about the shortest format, T20.

A three-match series with Zimbabwe kicks off at Stormont on Wednesday, the first step this summer towards the Euro T20 Smash in September and the World Twenty20 Qualifiers in Dubai the following month. All going well, Ireland will be in the Super 12s in October 2020.

There’s an awful long way to go before that however, as this is Ireland’s most fragile format, in which they’ve lost to Oman, Hong Kong and Papua New Guinea in recent years. They sank as low as 18th in the ICC rankings but have recovered to 15th, a whisker behind Wednesday’s opponents.

Gary Wilson takes over as skipper knowing his first task is to arrest his own alarming dip in batting form. Since he took over Ireland have won just one of their eight games, and with alternatives starting to emerge he needs to assert his leadership.

His illness in the winter opened the door for Paul Stirling, who impressed by winning two out of six, scoring three 50s. The last of those games, however, saw Afghanistan hit 278-3, smashing the world record by 20 runs. Stirling countered with 91 off 50 balls but Ireland still fell to a heavy defeat.

With the new spirit of youthful optimism around the squad, the selectors have brought in the dynamic Leinster all-rounder Gareth Delany. Although the experiment of opening with Stirling and Kevin O’Brien has been a success, room must be found high in the order for the hard-hitting 21-year-old.

Interpro form has been heeded too, which means a welcome recall for Greg Thompson, who was Ireland’s youngest international aged 16 way back in 2004, disappeared for eight years and has only 23 caps to his name in a 15-year career.

“I wouldn’t say I’d written off playing for Ireland again, but the last time I was in the squad I felt that probably hadn’t given it my best in terms of performances”, Thompson said. “Looking back now, those last caps were against a rising Afghan side featuring Rashid Khan – who has proven himself to be one of the top T20 bowlers in the world – so I’m just delighted to get another chance.”

Play starts on Wednesday at 12.30pm, while the next two games, at Bready on Friday and Sunday, start at 4pm.