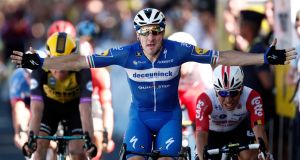 Italy’s Elia Viviani of Deceuninck Quick Step team celebrates his win as he crosses the finish line of fourth stage of the 106th edition of the Tour de France. Photo: Yoan Valat/EPA

The Tour de France peloton sped eastwards towards Thursday’s first summit finish in the Vosges, with the Italian Elia Viviani of the Deceuninck-QuickStep team taking a sprint victory in Nancy, the day after his teammate Julian Alaphilippe had won stage three and taken the yellow jersey in Épernay.

Viviani’s decision to quit May’s Giro d’Italia, despite a lack of success, in order to save himself for the sprint stages of the Tour, was vindicated as he powered clear of Alexander Kristoff of Norway to take a career-first stage win in the Tour.

But Viviani was indebted to Alaphilippe, who rode as his pilot fish while also maintaining his race lead, and who, for the moment seems unable to do any wrong, either on the road or in the French media.

“I enjoyed every kilometre today and at the end we got a beautiful victory so it was amazing,” Alaphilippe said. “I was in a good position and I was helping my teammate, but I was also scared [of crashes] because the finish was nervous.”

For the defending champion, Geraint Thomas, it was a routine, if hot, day in the saddle. But with Thursday’s final climb to La Planche des Belles Filles looming on the horizon, speculation over the Welshman’s form continues following Monday’s finish in Épernay when he lost five seconds to Egan Bernal in the uphill finish.

“No one wins the Tour on five-second sprint finishes but obviously it would be better not to have lost that,” Thomas said. “I was hoping just to slowly drift back a bit and the next thing I know no one is coming past me and I was like: ‘I have to try and close this gap’ but it was a bit late by then.

“Obviously it is nice not to lose five seconds,” he said. “If I am off the podium [in Paris] by four seconds then I might be more disappointed.”

At this early stage of a very mountainous Tour that may be won by minutes, a handful of seconds lost may signify very little, but Thomas’s inattentiveness has been interpreted by some as a sign of uncertain form.

However the Ineos team principal, Dave Brailsford, insisted that it was a mistake to read anything into the seconds ceded by Thomas to co-leader Bernal in Épernay.

“It wasn’t a five-second gap, though was it?” he insisted. “I think way too much has been made of it, if I am honest. If anyone understands the sport and you watch the sport, there is a 30-metre gap. Geraint sat up a little bit, he thought people were trying to come around him and that is it. People are trying to make out that it is a five-second gap and it is not.”

Asked if the minor setback for Thomas might influence a change in strategy, Brailsford responded: “100 per cent no. Nothing has changed.”

But he also admitted that Team Ineos had noticed the absence of the four-times winner Chris Froome, ruled out of racing after his crash in June’s Critérium du Dauphiné.

“Chris definitely has a presence,” Brailsford said. “He’s a winner, he’s serious about what he does. He’s on it, his attention to detail is good and if it’s not quite right he works to get it right. He works with everybody but he’s on it. That pervades the whole team and everybody is really focused and on it.”

“Geraint is not a screamer and shouter but he knows what he wants, he’s a strong character,” Brailsford said of the defending champion. “I think in general as a group they actually bond really well.

“They’re quite fiery, and if something happens they come back in here and they don’t hold back, which is healthy I think. I think there’s enough strength of character here on the bus for any team.” – Guardian

1 Keith Duggan: Through the glories and the disgraces, we were all Maradona addicts
2 GAA Statistics: Can Cavan and Thomas Galligan beat Dublin with the long kickout?
3 Rugby Stats: Blame game at lineout time is on the whole team
4 Diego Maradona dies of heart attack, aged 60
5 Andy Farrell to delve deeper into Irish squad for team to play Georgia
Real news has value SUBSCRIBE