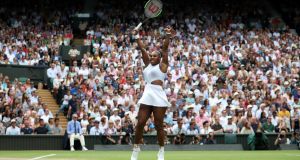 Serena Williams of the US celebrates winning her quarter final match against Alison Riske at Wimbledon. Photo: Hannah McKay/Reuters

A captivating match between Serena Williams and American Alison Riske boiled down to the queen of the Iron Throne occasionally looking vulnerable and tight on Centre Court. But as is usually the case, the subject fell into line.

On Court One Simona Halep, who ended the teenage run of Coco Gauff, came from 5-1 down in the first set to win 7-6(4), 6-1 against China’s Shuai Zhang. She will meet Elina Svitolina in one semifinal.

To that backdrop the best serve in tennis failed five times but still Williams mastered a 6-4, 4-6, 6-3 quarterfinal win against an opponent eight years younger, rising only to her imperious levels twice in the match.

“I really felt her upper level, her intensity. I hope she takes the title now,” said Riske a former doubles partner of Williams.

Both times Williams visibly forced up the intensity for focused short bursts at the ends of sets one and three, both efforts peaking perfectly.

Despite Williams numbers showing just what a job Riske faced with 10 Wimbledon finals and seven wins, 11 semi-finals and 14 quarterfinals, it wasn’t always evident she could fire up.

With Riske cutting balls wide the 37-year-old occasionally appeared too flat-footed to chase them down. At a point midway in the first set, a soft volley floated over, the older player just stuck in her stance flapping well out of reach.

“I wouldn’t have won that match a couple of weeks ago,” said Williams. “She was really so close to taking the win today.”

After four service breaks and four service holds in a fractured first set, Williams sucked Riske into her worm hole for the first time in the ninth game.

At 4-4 she served to love for 5-4 before earning two set points on the Riske serve, the younger player putting a stretch forehand volley into the net for 6-4.

Riske, who has won two career titles to Williams 72 bravely withstood her opponent’s power and stayed in the match, breaking serve once for 5-4 with a half volley at the net and serving out the second set to love to level 1-1.

The third set again rocked with service exchanges, Williams shrieking and unable to climb the mountain but her attack on the Riske forehand paid regular dividends.

But one more time she was able to come out swinging and keep the ball on court and at 4-3 up earned two break points, a third and then a fourth, Riske fatally double faulting for 5-3 and allowing Williams to serve out the match.

“It’s hard to say,” said the American mother about her level of fitness. She also had her ankle taped during the match after rolling it.

“I haven’t had a tremendous amount of time to prepare for this. But, you know, like I said in the beginning of this tournament, each and every match for me has to count as, like, five or 10 matches because I have not played a lot.

“This is the first time since Australia that I actually felt good. It’s been a really, really long year for me already, and hard year, because I’m usually not typically injured.”

The British were metaphorically on their knees for Konta, a semi-finalist in 2017 and the first British woman to get that far since Virginia Wade in 1978. All that was stopping her this year was Strycova, ranked 56 in the world.

It was there for the taking for the Hungarian-turned-Australian-turned-British player, a Centre Court setting, a semifinal place and a yearning for a woman to fill the 41-year-void was all that stood in her way. What could go wrong?

Yes there were errors. The British number one started strongly, racing to a 4-1 lead. Let down by her previously dominant and idiosyncratic serve and firing long when she had the whole court at her disposal, Konta unravelled leaving an American, a Romanian, a Czech and a Ukrainian in the semifinals with Strycova to face 23-time Grand Slam champion Williams.