Wimbledon: Family pride, Monday mimosas and breakfast with the Gauffs 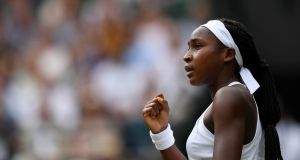 Cori Gauff celebrates a point during her loss to Simona Halep on Court One. Photograph: Tony O’Brien/Reuters

As Coco Gauff’s Wimbledon dream drew to an agonising close, the chants rang out. “We are proud of you, say we are proud of you,” filled the air of the Paradise Sports Lounge in Delray Beach, the drinking establishment owned by her father, Corey.

Family and friends packed this little spot in a typical Florida strip mall hoping to witness another landmark moment in Gauff’s meteoric rise. Paradise has never seen anything quite like it. Indeed, it’s normally closed on a Monday.

Yet here we were, at 9am and with the sun already blazing, as more than 100 people crammed in, giddy with excitement and hope. Perhaps it was the mimosas and breakfast burritos kindly donated by Lee Cohen, a local lawyer who was aghast to learn nothing special had been organised for Gauff’s latest monumental moment. “I called her aunt on Sunday night and told her we had to do something,” he said.

Coffee, breakfast fare and something a little stronger were all on offer with Aunty Joi Grant running the show, thanking everyone profusely for giving up their Monday mornings for the chance to witness something truly special.

Family members, led by Coco’s grandmother, Yvonne Odom, packed a top table while locals and assorted others gazed up at the action being beamed in from London. With some of the family originating from New Orleans, good luck beads were handed out.

“I have been wearing them for every round,” said Daisy Odom-Fulton, a great aunt. “But there’s also someone high above looking out for Coco.”

Seven news crews had set up shop, keeping an eager eye on events while photographers fixed attention on her excitable grandmother, who whooped and cheered with every point won from Gauff’s racket. Her 11-year-old brother, Cody, excitedly shook a cowbell. “The attention she is getting is crazy,” he said.

The Gauffs are a true sporting family – Corey was a reputable college baseball and tennis player, her mother, Candi, was a gymnast and Cody has a big baseball tournament coming up in Birmingham, Alabama, this week. “There’s a lot going on right now,” said Yvonne without a hint of understatement.

Gauff was visibly nervous early on as Halep, the former world No 1, began to assert herself and broke in the opening game.

Paradise, however, continued to keep the faith. “You go girl,” roared Yvonne as her granddaughter began to show signs of life.

The first set slipped away but hope flickered. After all, Gauff had so memorably recovered from a set down in the previous round against Polona Hercog. “Look what happened last time,” said another great aunt, Brenda Lee-Williams, watching on nervously.

Another break by the Romanian came at the start of the second but Gauff, who arrived at Wimbledon ranked 313 in the world but will now rise into the top 150, fought back and began to ask the former French Open champion some questions.

“It’s amazing what she is doing out there,” beamed her former mentor Dennis Murray. “What a learning experience for her.”

It was, however, not to be. When she saved two match points, the bar erupted once more – though Halep’s quality eventually shone through. The disappointment was obvious yet the heartwarming love and admiration for this local girl made good was unmistakable.

Her life will never be the same. The talk of multimillion-dollar sponsorship deals and a push to become a grand-slam champion have put paid to that. Her beloved grandmother Yvonne, however, wasn’t so sure.

“I am so proud, but I always have been proud of her,” she said after texting her granddaughter a simple “You’re the best and we love you” message.

“Look at what Coco has done, look around. The family have always known about what she could be capable of and now the world knows too.

Our pastor at the local church has started a series of sermons called ‘the Coco factor’. It’s all about perseverance and believing in yourself.

“She won’t have changed, though. We won’t let her change, we are grounded. She will still clean her room and go to church when she gets the chance.

“I don’t like to push the Bible on people but you have to understand when something is your calling. God has given her a gift and she has to treasure it.” - Guardian