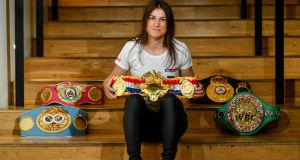 For the first time since turning professional in the wake of the 2016 Olympics, Katie Taylor is enjoying some respite, away from the ring, out of the firing line.

There were 988 days from the moment she penned her first professional contract to the night she defeated Delfine Persoon in Madison Square Garden, unifying the division and cementing her legacy at the zenith of world boxing. In that time the Bray fighter fought on average every 66 days. The break. it’s fair to deduce, is richly deserved.

But while Taylor has taken time to digest her achievements, the rest of the world has descended into the predictable vortex of speculation, attempting to hazard a guess at the world champion’s next move.

In the aftermath of her triumph last month, Taylor’s team mentioned Amanda Serrano as her most likely next opponent, though the Puerto Rican’s recent pronouncements on social media have raised doubts.

Serrano, believed to be on a three-fight contract with DAZN, has claimed that she had yet to see or sign a contract.

“My understanding is that she signed a three-fight deal and on that contract she has to fight me on the third fight,” explained Taylor at a special screening of Katie, the documentary on her life, yesterday.

“She’s one fight in, she has to fight again and then I’m the third fight on that contract. She’s claiming that she didn’t see the contract so I don’t know what’s going on.”

Either way, a move up through the divisions is the obvious next route for the 33-year-old, headlining a card back at MSG just one target on the horizon.

Managing weight may prove to be an obstacle in that pursuit, though Taylor insisted it shouldn’t be an issue despite having yet to step on the scales since her victory over the Belgian.

“I don’t really go much above my fight weight, to be honest. I might walk around at 142 pounds. I haven’t actually checked my weight since the fight so I don’t know what weight I actually am right now.

“I’m always in training, always in the gym. I took a few days off but I’m always ready for the next fight. I’m a bit of a gym rat. I never go too far above the actual fight weight.”

Sitting next to her at the Lighthouse cinema in Smithfield for yesterday’s special screening was her manager, Brian Peters, who shed light on the possibilities for Taylor in the coming months.

“It’s funny because the boxing landscape changes every week,” he said. “Before the big upset with AJ (Anthony Joshua) getting beat we would have probably discussed [DEONTAY]Wilder and AJ fighting in Vegas and potentially Katie fighting Cecilia Brækhus, undisputed champion against undisputed champion.

“The Serrano fight is the one that’s our preferred choice. We might potentially move up a division, pick up some belts there. Jessica McCaskill got a couple of belts so Katie wouldn’t mind being a two-weight world champion.”

Taylor previously fought McCaskill before the American moved up a division to collect two belts at 140 pounds. McCaskill, therefore, represents a realistic jump for the Bray fighter currently fighting at 135 pounds, with a bout against Cecilia Braekus, fighting at 147 pounds, also a possibility at a catch-weight of 141 pounds.

“Katie is all about making history, doing something that has never been done before, breaking boundaries,” continued Peters.

“If Persoon was to call Adam [Smith, Sky Sports] they would have her on a Sky bill but they have to do their work too. She needs to fight.”

So while options are plentiful, the future remains up for discussion and negotiation.

It leaves Taylor with a little time to reflect on her achievements, before making further inroads on the development of women’s boxing as well as her own legacy.

“I’ve said this before but people’s perceptions of women’s boxing and women’s sport in general has change dramatically over the last few years,” she said.

“To be actually living in the middle of all this now is actually incredible. It’s very, very exciting.”