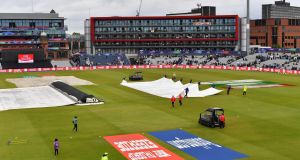 The groundstaff start to remove the covers as the rain stops during the 2019 Cricket World Cup first semi-final between India and New Zealand at Old Trafford. Photo: Paul Ellis/Getty Images

New Zealand will resume on 211 for five after the end of an attritional innings was curtailed by rain, prompting their World Cup semi-final against India to be taken to a reserve day.

Kane Williamson and Ross Taylor registered battling half-centuries on a sluggish Old Trafford surface, where early seam movement under heavy cloud cover and turn for the spinners made life difficult for the Kiwi batsmen.

Taylor struggled for fluency but was gradually building momentum before a steady drizzle turned heavier as the players were brought off at 2pm local time, with the Black Caps 3.5 overs short of completing their innings.

The showers briefly relented at 5:30pm to raise hopes of completing the fixture, albeit with India facing a 20-over chase, but then returned, ensuring play will be deferred until Wednesday morning at 10:30am, weather permitting.

International Cricket Council regulations mean New Zealand will carry on where they left off, with Taylor on 67 not out alongside Tom Latham (3no) as they look to push their side on to a competitive total in a match that is still 50 overs per side.

Williamson had earlier gone past 500 runs for the tournament but his 67 used up 95 deliveries on a day where all five of India’s front-line bowlers took a wicket apiece.

Ravindra Jadeja, preferred ahead of Kuldeep Yadav, was economical, as was Jasprit Bumrah, whose probing lines and changes of pace meant he conceded only 25 runs from his eight overs.

He was thrust into action almost immediately after India were invited to field on a ground where the side that has batted first in five previous matches in this tournament went on to win.

The group stage table-toppers burned their review after the first ball, Bhuvneshwar Kumar rapping Martin Guptill on the pads but Hawkeye showing the delivery was sliding past leg-stump.

Guptill was therefore spared a third golden duck of the tournament but the out-of-form opener would not last, contributing one off 14 balls before prodding at Bumrah and edging to Virat Kohli at second slip.

New Zealand had taken 17 balls to get their first run and though Williamson was a little more purposeful following his arrival at the crease, a score of 27 for one after 10 overs was a tournament low.

Henry Nicholls made it to double figures for the first time in three innings before being bowled through the gate for 28 off 51 balls by a delivery that turned back into him off Jadeja.

That brought together Williamson and Taylor but even the two experienced hands could not turn the tide, a watchful stand of 65 in exactly 17 overs yielding only five fours.

With Taylor struggling for timing it was left to Williamson to up the ante, the New Zealand captain slicing the recalled Yuzvendra Chahal to short third man, deceived by a delivery that seemed to stick in the pitch.

Taylor eventually kicked into gear, launching Chahal over deep mid-wicket for the first maximum of the innings to get to his 50 as New Zealand took 18 from the leg-spinner’s final over.

Taylor successfully reviewed a leg-before decision off Bhuvneshwar on 52, having been hit outside the line of impact, before the players were hauled off after 46.1 overs as the inclement weather worsened.

A three-and-a-half-hour delay followed before the rain eventually abated, only to return after the ground staff had hurriedly attempted to ready the field for play again.

The rain had led to four no results in the group stage — including the abandonment of India v New Zealand at Trent Bridge last month — and the forecast is for further showers on Wednesday.