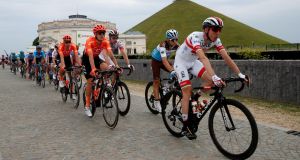 Nicolas Roche remained 19th overall in the Tour de France after Tuesday’s stage four to Nancy, with both he and Dan Martin finishing as part of a main bunch led home by Elia Viviani (Deceuninck-QuickStep). Neither contested the sprint, with Martin 72nd and Roche 93rd.

Martin improved two places in the general classification, rising to 36th overall. Roche remains one minute behind the ongoing race leader Julian Alaphilippe (Deceuninck-QuickStep), and Martin is a further 28 seconds back.

“Today could have been a very tricky stage. There were very open roads, but luckily the wind wasn’t strong enough to cause any damage,” Martin told the Irish Times. “It just caused a lot of tension. Everybody was just watching each other and making sure that nobody was going to be caught out. There was a crash at one point that I managed to stay clear of. It was just a constant fight for position all day.

“Towards the end of the stage it always gets intense. The last few kilometres were super-fast and a lot of fighting for position. But you just had to take it as relaxed as possible. That is what we did. I have got [former world champion] Rui Costa and Sergio Henao looking after me. They are always staying with me, being attentive and making sure I am okay. Both of them helped me really well in the last few kilometres to stay safe and sound and to get to the finish line in the same time. That is what really matters, the finishing position is irrelevant.”

Roche’s tactic is to aim for a stage win in the race, while Martin is targeting both that and the overall classification. Wednesday’s stage is a lumpy race to Colmar and includes two second category and two third category climbs. It appears conducive to a breakaway, although the final category three climb is sufficiently far from the finish for the stronger sprinters to be in the running.

Martin’s attention will be focussed on Thursday’s uphill finish to La Planche des Belles Filles. He was second there in 2017 and it will be both the first opportunity for stage success and the first real test of his form.

1 Munster beat Glasgow to keep their winning streak going
2 The Offload: Ireland are stuck in no man’s land
3 Every kind of wind imaginable was against Tipperary football - and they came through
4 Nicky English: Galway and Waterford face battles with fatigue in All-Ireland semis
5 Ken Early: Roles have reversed for Guardiola and Mourinho
Real news has value SUBSCRIBE

Munster beat Glasgow to keep their winning streak going 22:31
Solskjaer says United must be fully focused to avenge Istanbul defeat 22:30
Southampton and Wolves share the spoils at Molineux 22:20
How a visit from his barber helped Kyle Sinckler get back to his best 22:05
Mickey Harte is the new Louth football manager 21:59