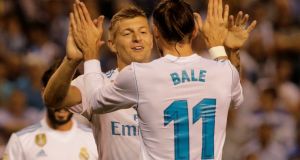 Real Madrid coach Zinedine Zidane hopes he can keep his all-conquering squad intact after watching them begin their LaLiga title defence with a convincing 3-0 win at Deportivo La Coruna.

First-half goals from Gareth Bale and Casemiro set Real on their way at the Riazor before Toni Kroos’ second-half finish sealed a win that leaves Real top of the table at the end of the opening weekend.

Depor, who had several good chances to score themselves, missed a late penalty through Florin Andone before Real captain Sergio Ramos was sent off after picking up a second booking in the 90th minute.

The victory continues an impressive month for Real which has already seen them add the Uefa Super Cup and Spanish Supercopa to their bulging trophy room, and Zidane hopes all his players can continue helping the club win even more silverware.

The future of players such as Cristiano Ronaldo and Gareth Bale have been the source of much speculation this summer, but Zidane is keeping his fingers crossed nobody exits the club before the transfer window closes.

He said after the match in quotes reported by the Spanish press: “Nobody has asked me to leave, I want this squad as it is and I hope there won’t be any changes, but until August 31st anything can happen.”

Regarding the win over Depor, Zidane declared himself happy with the result and performance, but not the late red card shown to his skipper.

Ramos, who was booked following a second-half incident involving Fabian Schar that could well have seen both players dismissed, was handed a second yellow card in stoppage time following an aerial challenge with Borja Valle.

Zidane said: “In general we’re happy, it’s not an easy ground to come to, and they were a team who can make things difficult for you and they had their chances.

“I’m happy for the content of the game, but not for what happened with Sergio.

“I don’t like to see a player dismissed, but it’s something that we cannot change. I don’t know if Ramos’ card is fair, I have to see it, but I’m not going to talk about that. I lost a player and I cannot be happy with that.”