Bolt breaks down as Britain sprint to relay gold

Sprint legend pulls up injured on his final ever competitive appearance 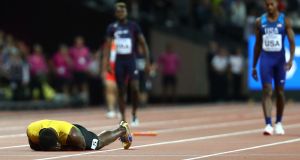 As sporting farewells go it was spectacularly surprising on the double - Usain Bolt pulling up injured in what was his last ever race on the track, while Great Britain won the gold medal - only their second of these World Championships.

They say anything can happen in the 4x100m relay but truth is no one expected this: Bolt looked certain to add a medal of some colour to his already 11 World Championship gold medals won over the last decade, two silvers, and not forgetting the bronze medal won in the 100m final last weekend.

Not forgetting his eight Olympic gold medals either.

Instead Bolt ended up flat on the track, pulling up with that appeared to be a hamstring injury about halfway down the anchor leg.

Britain’s gold came from a brilliant lead off from Chijindu Ujah, who passed off to Adam Gemili; another perfect pass from Daniel Talbot to Nethaneel Mitchell-Blake on the anchor leg and gold was theirs.

More booing too for 100m gold medal winner Justin Gatlin on his entry, who ran the second leg with the American team along with Mike Rodgers, Jaylen Bacon and Christian Coleman, who won the individual gold.

The carnival atmosphere continued in London’s Olympic Stadium despite Bolt’s collapse to the track even though the Jamaican team of Omar McLeod, Julian Forte, Yohan Blake and then Bolt never made it across the line.

Jamaica had only qualified in 37.95 seconds, slower than Great Britain and the USA from the first heat - but had been expected to challenge for the podium in Saturday evening’s final - Bolt’s last race of his career.

Definitely not the farewell he or anyone else was expecting.

Earlier, the British 4x100m relay women won silver, only the third medal for the hosts after the gold and silver of Mo Farah; their squad of Asha Philip, Desiree Henry, Dina Asher-Smith, and Daryll Neita finished second to the USA, who clocked 41.81 to Britain’s 42.12 - with the Jamaicans run down by both of those in third. However there was an appeal Britain had run out of their lane, which was still being heard.