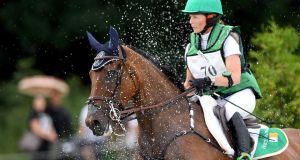 In spite of a fence down in Sunday’s concluding showjumping phase, Ireland’s Sarah Ennis finished seventh at the European eventing championships in Strzegom, Poland.

The Co Meath rider picked up four penalties when Horseware Stellor Rebound lowered the oxer at nine, the combination completing on a three-phase total of 43.40. On Saturday, they stormed around a very troublesome cross-country course with the addition of just 0.80 of a penalty.

The individual gold and silver medal were won by Germany’s Ingrid Klimke on Horseware Hale Bob (30.30) and her compatriot Michael Jung with fischerRocana FST (32.80). Nicola Wilson claimed the individual bronze on Bulana (35.50) and she was followed on the leaderboard by Kristina Cook on Billy The Red (38.20) and Rosalind Canter with Allstar B (40.2), this trio winning team gold for Great Britain on a combined score of 113.90. Their fourth team member, Oliver Townend, withdrew Cooley SRS before the showjumping phase and provided the discard score.

Bidding for a fourth successive team title, Germany had to settle for silver on 123 with Sweden holding on for bronze (148.40) although Sara Algotsson Ostholt, who had been lying third individually overnight, had three fences down with Reality 39 and dropped to ninth. The Irish team, which also comprised Michael Ryan on Dunlough Striker (94.20), Joseph Murphy with Sportsfield Othello (131.60) and Austin O’Connor who was disqualified following a fall on the cross-country phase with Kilpatrick Knight (discarded score), finished fifth (269.20) of the 13 nations which started the competition.

Riding as an individual with Dunlough Eclipse, Patricia Ryan completed on a total of 79.20 in 22nd place.