Lampaert claims red jersey as Vuelta heads for the hills 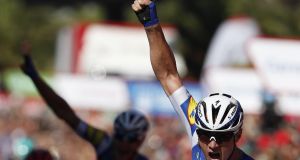 Yves Lampaert became the new leader of the Vuelta a España on Sunday after the Quick-Step rider won stage two with a solo attack on the final stretch of the 203.4-km ride.

Lampaert took the red jersey thanks to the 10-second bonus picked up for the stage win, his first in a grand tour, and leads the general classification by one second over his Italian teammate Matteo Trentin.

Overall favourite Chris Froome is ninth, 21 seconds behind Lampaert, after coming 16th, eight seconds off the Belgian’s time, in the stage and finishing the highest of the Team Sky riders.

Sky led the peloton with six kilometres to go but were caught by the Astana and Quick-Step teams, while Lampaert attacked on the final kilometre, taking advantage of a change in wind direction on a roundabout.

“At the moment I don’t know what’s happening, it’s really crazy for me,” said Lampaert. “During the race we planned that if we could make an echelon, we would try in the last 10ks. We went full out from the last three kilometres, then we were away with (team mate Julian) Alaphilippe and a few guys in the break.

“After that, just before the roundabout, they shouted at me: ‘Go, go, go!’ I knew I could ride one kilometre very fast and it worked out.”

Froome will be looking to strike the first blow in his bid to become the first rider to achieve a double of the Vuelta and the Tour de France in the same year when the 21-day race has its first mountain stage on Monday, a 158km ride through the Pyrenees in Andorra.

Moroccan rider Anass Ait El Abdia of UAE Team Emirates and Javier Moreno of Bahrain - Merida had to abandon after being involved in a nasty crash some 60kms from the finish line.

It was the second grand tour Moreno has had to abandon this year after he was disqualified from the Giro d’Italia for pushing Team Sky’s Diego Rosa.