Is the curtain coming down on tennis’s golden generation? 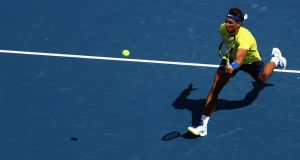 What to make of the state of men’s tennis? For the best part of a decade a quartet of hall-of-famers have transcended their sport by lifting it to hitherto untouched heights with their titanic struggle for supremacy while below them a host of challengers have strained to swell the numbers of the elite club known as the Big Four. Plenty have tried, most have failed. Some have offered flashes of impertinence but only Stan Wawrinka has provided a sustained threat to the established order. The entry requirements are gruelling. The top players ally astonishing skill with an almost masochistic willingness to suffer for their art.

But throughout 2017 there has been a persistent sense that the curtain may be about to fall on this golden age. Where once there was order now there is disarray. The show isn’t quite over yet, but the audience is waiting to rise to its feet and this is when the mind goes back to Andy Murray’s prediction on the eve of the ATP World Tour Finals last November.

Having ended Novak Djokovic’s run of 123 weeks as world number one, Murray could not help but notice that time appeared to be catching up with Roger Federer and Rafael Nadal, the two greatest players in the history of the game. “I think next year will be interesting,” Murray said. “That will be the time to sort of tell whether it’s done and that era is past.”

Murray needs no reminding he has suffered more than Federer and Nadal in 2017. Instead of falling away after enforced layoffs they have thrilled their legions of fans by soaring again, rolling back the years in Melbourne, Paris and Wimbledon, and the hype will go into overdrive if, next month, they meet in the US Open for the first time, preferably in the final.

Yet Murray was right in a way. The Scot’s withdrawal from Cincinnati with the hip problem that led to the defence of his Wimbledon title ending in a sad, one-legged defeat to Sam Querrey, combined with Federer’s decision to rest the stiff back that undermined him in Montreal last week, means that on Monday Nadal will rise, unchallenged, to the top of the rankings for the first time in more than three years, despite losing his quarter-final in straight sets to Australia’s Nick Kyrgios on Friday night. A measure of the flux unsettling the men’s game is that Nadal’s points total of 7,645 is the lowest held by a number one since the introduction of a new system in 2009.

Take nothing away from Nadal’s extraordinary resurgence. The Spaniard was the world number nine at the start of the year, with his powers seemingly dimmed by those creaking knees, but he has willed himself back to the summit, losing to Federer in a classic Australian Open final before bulldozing his way to La Décima at the French Open. The numbers at Roland Garros were terrifying: Nadal collected his 15th major for the loss of 35 games and no sets over seven matches. Yet since his last-16 defeat to Gilles Müller at Wimbledon Nadal has had to do no more than tie up his laces, arrange his water bottles, scratch his shorts and furrow his brow in order to overtake Murray. It is a long time since the field has looked this open.

It began with Djokovic, who has looked spiritually and physically drained since completing the career slam at Roland Garros last year, withdrawing from the rest of the season last month. Wawrinka, the defending US Open champion, soon followed suit because of a knee injury and Murray may not make it far if he drags his weary body to New York.

The grind of the tour takes a heavy toll. Kei Nishikori, who flatters to deceive, will not play again this year. Marin Cilic, who lost the Wimbledon final in three teary sets to Federer, and Milos Raonic missed Cincinnati.

With Djokovic, Murray and Wawrinka suffering the path to glory is clearer. In theory. Yet whether this really is the moment those craving less predictability have waited for is debatable. Heightened anticipation about a new era is distilled by concerns about diminished competitiveness, that Nadal and Federer will have no one to fear but each other at Flushing Meadows.

Federer, who turned 36 on August 8th, cruised to his 19th major at Wimbledon, while the 31-year-old Nadal looks ready to improve on his recent disappointing performances in Flushing Meadows. The Big Four have won 45 of the past 50 majors. The absence of Wawrinka, the fifth Beatle, is not encouraging. Tennis has waited a while for others to step up. The Bulgarian Grigor Dimitrov is beautiful to watch but is lacking in substance. Austria’s Dominic Thiem must produce more away from the European clay.

But while history suggests Kyrgios’s win over Nadal might turn out to be a flash in the pan, other rising stars stirred in Montreal last week. First Denis Shapovalov, the 18-year-old Canadian who made headlines for the wrong reasons when he was defaulted from a Davis Cup tie against Great Britain in February for accidentally hitting an umpire, recorded a stunning 3-6, 6-4, 7-6 (4) win over Nadal, hitting 49 winners to become the youngest quarter-finalist at the Rogers Cup since Bjorn Borg in 1974. Then the 20-year-old Alex Zverev ruthlessly exploited Federer’s stunted movement in the final.

Federer tortured Zverev when they met on the grass of Halle in June. But the tall, graceful German, who won his first Masters 1000 title when he crushed Djokovic in Rome a month earlier, is developing at frightening speed.

Until now there have been only squeaks from the next generation. But the rumbling is getting louder. If Zverev has his way, soon it will be impossible to ignore.