Cork should have the edge over Dublin 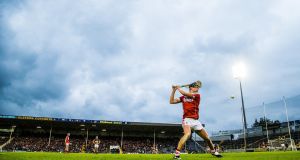 Cork’s Daire Connery will be central to their plans on Sunday. Photograph: Tommy Dickson/Inpho

Cork will look to take another progressive step towards their second national title of the year when they face Dublin in tomorrow’s Electric Ireland Minor Hurling Championship semi-final at Croke Park (1.30pm).

The counties met last Sunday in the Under-17 decider with Cork doing just enough to prevail by 1-19 to 1-17. Dublin’s challenge wasn’t helped by the 42nd minute dismissal of midfielder Tom Aherne.

Aherne will not be involved tomorrow but plenty of the chief protagonists from six days ago will feature with Cork able to call upon talented midfielder Daire Connery, who struck six points in last week’s clash, along with four others from their victorious line-up.

Connery’s power was a key factor in Cork’s win on that occasion and his side would appear to enjoy an advantage in terms of physicality against a Dublin team that have placed an emphasis on mobility rather than physical strength and size.

The Dubs have had a slightly easier path to the last four, comfortably defeating Antrim in their one-sided quarter-final, with Seán Currie proving their attacking talisman throughout the campaign.

The Na Fianna player scored 2-13 against Antrim and his overall contribution can be reflected in a personal tally of 2-40 in Dublin’s four games to date.

That the Leinster runners-up require greater attacking support for Currie is beyond argument and the talented Liam Murphy has sufficient pedigree and skill to deliver on the big occasion.

Whether the aforementioned duo are given enough latitude to shine could well determine the outcome, And while Cork have come through a far tougher examination en route to the last four, they shouldn’t underestimate the potential in Dublin’s ranks.

The Rebel County dodged a bullet in their provincial semi-final, being taken to a replay by Tipperary, and two goals from Evan Sheehan set the tone for a comfortable 4-21 to 0-16 success against Clare in last month’s Munster final.

That win ended a barren run of nine years for Cork but given the results at all underage levels over the past two years, it’s unlikely they’ll suffer a similar spell over the coming campaigns.

Captain Seán O’Leary Hayes has been a commanding presence at full-back for Cork all year and his anticipated duel with Currie is one on which the final outcome may well hinge.

There is strong momentum around the whole of Cork and that shouldn’t be stalled tomorrow with Cork anticipated to confirm a final berth against Galway.